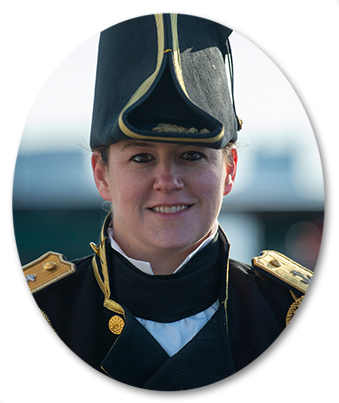 Billie June (BJ) Farrell was born in Paducah, Kentucky. She attended the United States Naval Academy and was commissioned in 2004 with a Bachelor of Science in political science. In 2009, she earned a Master of Science degree in operations management from the University of Arkansas.

Her first division officer tour was aboard USS Vella Gulf (CG 72) as electrical officer. She then briefly took over as OI Division Officer before being promoted to navigator for her second tour. After completing her two division officer tours, Farrell reported to Commander, Naval Personnel Command (COMNAVPERSCOM) in Millington, Tennessee and became an action officer in PERS-833 (Post Selection Board Matters). While there, she assumed duties as delay section head and assistant board screener.

After departing PERS-833, Farrell started the Department Head pipeline. She reported to USS San Jacinto (CG 56) in March 2012 as the weapons officer and then became the combat systems officer onboard. Her next tour was as deputy director for professional development at the United States Naval Academy. After departing the Naval Academy, Farrell reported to Commander, Naval Surface Force Atlantic as deputy N3. She then served as executive officer onboard USS Vicksburg (CG 69).

Farrell became the first female to assume command of USS Constitution on January 21, 2022.