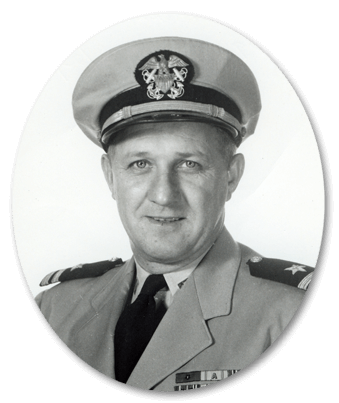 Charles William Morris was born in East Boston, Massachusetts on August 30, 1916 and enlisted in the navy in April 1934. He began his sea service aboard the battleship California (BB-44) in the Pacific Fleet, then came back to the Atlantic for duty on the heavy cruiser Quincy (CA-39) and the light cruiser Savannah (CL-42), both of which were employed in Spanish waters to protect American interests during that country’s civil war. With World War II beginning in Europe, Morris was assigned to duty in the new aircraft carrier Wasp (CV-7). Throughout 1940, the vessel was involved in training and operations in the Neutrality Patrol. In mid-1941, she twice made trips to Malta, delivering aircraft to that besieged island. In June 1942, she joined the Pacific Fleet and soon saw combat in the Southwest Pacific. Morris survived the carrier’s sinking in the Battle of the Santa Cruz Islands on November 15, 1942. His new duty station was the escort carrier Copahee (CVE-12), which was engaged in delivering aircraft from the West Coast to Fiji, the New Hebrides Islands, New Caledonia, and Australia. Promoted to boatswain, Morris returned to the Atlantic Fleet in February 1944 in the tank landing ship LST-519 and participated in the D-Day landings at Normandy. After a brief period ashore late in 1945 and early 1946, he served as chief of ship in the landing craft LCI(L)-954 and the oiler Pawcatuck (AO-108). Commissioned a lieutenant junior grade on June 13, 1950, Morris returned to sea in April 1951 aboard the destroyer Kenneth D. Bailey (DD-713) and subsequently served in the tank landing ship LST-306 and the antisubmarine patrol craft PCS-1378. He was promoted to lieutenant on July 2, 1953.

Morris took command of Constitution and her support ship, the 1854 corvette Constellation, on June 22, 1954. Command of the latter ended on July 23, 1954, when Constellation was decommissioned. Shortly before Morris left Constitution, the ship was drydocked for the replacement of 390 sheets of copper on her hull. His command tour ended on April 25, 1957.

Morris immediately assumed command of the fleet tug Apache (ATF-67) and remained in that command until August 1959, having been promoted to lieutenant commander on September 1, 1958. From then until his retirement in the early 1960s, Morris had a series of shore assignments. He died on March 14, 1993 in Chula Vista, California.