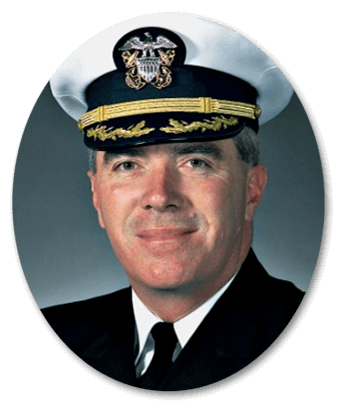 Christopher Allan Melhuish was born in Baghdad, Iraq in 1957 and raised in North Africa. He was educated in the United Kingdom where he graduated with a Bachelor of Arts with honors in physical geography. He also served three years in Britain’s Territorial Army as a Special Forces radio operator. Melhuish settled in the United States and received his commission at Officer Candidate School Newport, Rhode Island in November 1979. He was captain of the U.S. Atlantic Fleet’s rifle team. His subsequent sea duty assignments included service in a frigate, three destroyers, two amphibious ships, and a cruiser-destroyer group staff embarked in an aircraft carrier during Operation Desert Storm. Melhuish attended the U.S. Naval War College in Newport, Rhode Island, graduating with distinction in 1995. He graduated from the Armed Forces Staff College in Norfolk, Virginia in 1996. While assigned to NATO’s Supreme Allied Command, Atlantic, Melhuish was the lead planner for Strong Resolve 98, the largest field training exercise conducted by NATO.

Melhuish relieved Commander Michael Beck on July 26, 1997. He was invited by Beck to report to Constitution three weeks before the change of command, and subsequently provided additional assistance to Beck for Constitution’s historic sail in July 1997.

While in command, Melhuish initiated a U.S. Navy-wide heritage indoctrination for new chief petty officers (CPOs), drafted the ship’s interpretive manual, created demonstration gun and gig crews, and redesigned the crew’s uniforms to a more historically authentic 1813 pattern, which was incorporated in the U.S. Navy Uniform Regulations. In 1997, the National Maritime Historical Society conferred the American Ship Trust Award to Melhuish for his contributions in promoting Constitution. Master Chief Petty Officer of the Navy James Herdt conferred the honorary title of chief petty officer to Melhuish in recognition of his support to the CPO community.

On May 21, 1998, the U.S. Navy conducted an extensive underway tow trial of Constitution for approximately 10 hours. The 50-nautical-mile tow briefly took the ship into international waters for the first time since 1934, during its National Cruise. In July 1998, the final bicentennial activity for Constitution and the U.S. Navy involved an international salute to Constitution from 19 tall ships and modern navy vessels from various countries. Melhuish’s change of command ceremony was held on July 30, 1999.

From 1999 to 2001, Melhuish served as the U.S. Navy liaison officer to Commander, British Forces Gibraltar and as the de facto U.S. consular agent. In 2001, he and his wife, Kathryn, a naval reserve officer, were both promoted to captain by the Governor of Gibraltar. Following his tour in Gibraltar, he was selected to serve as a senior fellow at the Atlantic Council of the United States in Washington, D.C.  His last assignment was on the staff of the U.S. Fleet Forces Command in Norfolk, Virginia, where he served 17 years first as a U.S. Navy captain, and then later as a civil servant in the Fleet Plans and Policy Division (N5). He retired in October 2019 after 40 years of federal service.

After formulating the concept of Ship of State during his command tour, Melhuish later successfully lobbied and garnered support for the formal designation of Constitution as “America’s Ship of State” in the 2009 National Defense Authorization Act.

His military and civilian awards include the Legion of Merit and the Department of the Navy’s Superior Civilian Service Award. He is a member of the National Society of the Sons of the American Revolution, and the Naval Order of the United States, whose honorary flagship is USS Constitution.