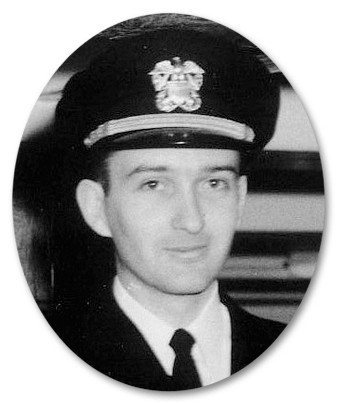 Edward Melanson was born in Stoneham, Massachusetts. He received a Bachelor of Arts degree from Tufts University and his U.S. Navy commission from the Tufts Naval Reserve Officers’ Training Corps (ROTC) program in 1957.

As a Lieutenant Junior Grade, Melanson took command of USS Constitution on March 31, 1959 during a fierce blizzard in Boston. In December 1959, he conducted the ship’s first turnaround cruise in Boston Harbor with passengers aboard. Turnaround cruises began in the 1950s when the ship was periodically turned to evenly weather both sides of the wooden hull, but these cruises did not include guests until 1959. Melanson left the ship on July 1, 1960.

Continuing his service as a line officer, Melanson was flag lieutenant for the Commandant First Naval District, and later served on destroyers and cruisers of the Second and Sixth Fleets. He graduated from the Defense Intelligence School and, while a student at the Naval War College, received a Master of Science degree from George Washington University in 1972.

Melanson served in Seventh Fleet amphibious operations in the Western Pacific during the Vietnam War. Among other sea assignments, he was navigator of USS Little Rock (CLG-4), which was the Sixth Fleet flagship in the Mediterranean in the mid-1960s. At that time, Little Rock assisted USS Liberty (GTR-5) after she was unexpectedly attacked by air and surface units of the Israeli Defense Force. Serving later in his designated sub-specialties of Intelligence and Politico-Military Affairs, Melanson was assigned to the Office of the Joint Chiefs of Staff and as Deputy Navy Representative to Vice Admiral Joseph P. Moorer, Vice Chairman of the United States Delegation to the United Nations Military Staff Committee.

Beginning in 1975, Melanson served in the Office of the Secretary of Defense at the Pentagon for Policy, Plans and National Security Council Affairs. In this role, he was specifically focused on participating in several international negotiations, including as defense representative to the Antarctic Treaty Consultative Meetings (ATCM), the United Nations Committee on the Peaceful Uses of Outer Space (COPUOS), its subcommittee on the use of nuclear power in space, and other negotiations involving intelligence matters and international space policy specifically involving the Soviet Union. He was chief staff officer for the navy’s annual reviews of its Agreement Between the Government of The United States of America and the Government of Soviet Socialist Republics on the Prevention of Incidents On and Over the High Seas held annually in Washington and Moscow. During his final years of active duty, Melanson served as senior defense adviser in the United States Delegation to the Nuclear and Space Arms Negotiations with the Soviet Union in Geneva, Switzerland.

After retiring from the U.S. Navy at the rank of captain in 1988, Melanson served in the White House as the assistant for national security in the Office of Presidential Personnel under President George H. W. Bush. He returned to Geneva in 1991, served briefly in the State Department as deputy, and was later appointed by President Bush as Chief Negotiator for Defense and Space for the U.S Delegation to the Nuclear and Space Arms Negotiations, with the rank of ambassador. Melanson is now retired from government service.