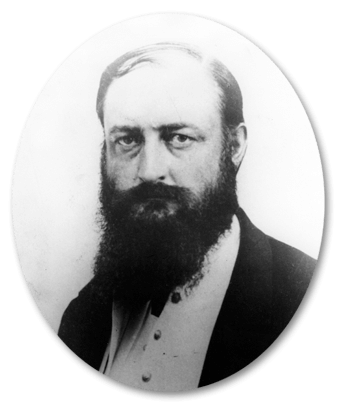 Edward Phelps Lull was born in Windsor, Vermont on February 20, 1836. In 1845, he moved with his widowed mother to Wisconsin, where he received an appointment to the Naval Academy on October 7, 1851. After graduating in June 1855, Lull began service on the sailing frigate Congress, bound for the Mediterranean.

In September 1860, Lull was appointed as assistant professor of Ethics and English at the Naval Academy before it was moved to Newport, Rhode Island for the duration of the American Civil War, and was then briefly reassigned to the screw frigate Roanoke as lieutenant. While on Roanoke, he participated in the sinking of the schooner Mary in July 1861.

Lull returned to the U.S. Naval Academy as executive officer and senior instructor of the training ship Constitution on September 23, 1861. He served in that position until December 15, 1863.

In December 1863, Lull returned to active service and took part in the battle of Mobile Bay as commander of the screw sloop USS Brooklyn. During the battle, the Confederate ironclad ram Tennessee was taken. Lull, now lieutenant commander, was given command of Tennessee in the West Gulf Blockading Squadron until May 1865. After the war, Lull was ordered to begin a survey expedition on the Isthmus of Panama to locate a site for a canal to be cut. He departed Brooklyn Navy Yard on January 28, 1870 in command of the steamship USS Guard. He arrived in Caledonia Bay, off the Isthmus, on February 18.

Lull’s full survey was reported in The New York Times on February 2, 1874 and made a number of recommendations and cost estimates. Between 1879 and 1880, Lull commanded the screw sloops Wachusett and Iroquois, stationed in Alaska. Lull was the naval commander in Alaska between August 1881 and October 1882. During this time he was promoted to captain. In 1886, he was ordered to command the Pensacola Navy Yard. Captain Lull died in Pensacola on March 5, 1887.