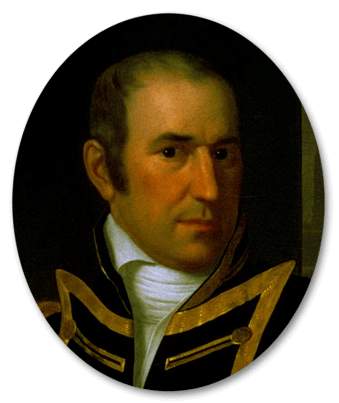 Edward Preble, a “downeaster” from Maine, was born on August 15, 1761. He was the fifth child of General Jedidiah Preble and his second wife, Mehitable Roberts Bangs. A person of strong feelings and a mercurial temper, as well as an expert marksman, Preble first went to sea on a privateer shortly after his 17th birthday. The next year, 1779, he became an acting midshipman in the Massachusetts state frigate Protector. Later, he was a lieutenant aboard the Massachusetts sloop Winthrop, and served on several successful cruises until the ship was sold out of service in June 1783. For the next 15 years, Preble went to sea regularly in the merchant service, and quickly attained the position of master. In November 1798, Preble returned from a merchant voyage to find that, six months earlier, he had been commissioned a lieutenant in the new United States Navy. Taking command of the brig Pickering, he made a four-month cruise in the West Indies that netted two prizes. When he returned to Boston in June 1799, he found he had been promoted to Captain. In January 1800, he sailed from Newport, Rhode Island aboard the frigate Essex to the Indian Ocean to protect American merchantmen from French privateers. Preble brought Essex back to New York in November 1800. In April 1801, as he was readying Essex for service in the Mediterranean, Preble requested a leave of absence due to his ill health.

After a period of rest to recover his health, Preble arrived in Boston in May 1803 and promptly set about readying Constitution for service as squadron flagship in the ongoing Barbary War. Sailing in mid-August, he arrived at Gibraltar and spent some time briefing himself on the political situation in the Mediterranean. At Syracuse, Sicily he established a supply center and also visited the King of Two Sicilies at Naples and secured six gunboats with crews to provide shallow vessels for inshore fighting.

In February 1804, Preble directed Charles Stewart and Stephen Decatur to take the brig Siren and bomb ketch Intrepid to Tripoli to destroy the captured U.S. frigate Philadelphia. Decatur led the boarding party. The Americans drove off the Tripolitan watchkeepers and set fire to the ship. When summer came, Preble took his entire force to Tripoli. From late July until early September, he made a series of assaults on Tripoli’s defences that made a significant impression on the Bashaw. Additional American vessels began to arrive in September, but because there were not enough captains junior to Preble, he was succeeded in command of the squadron. After sailing Constitution to Malta for repairs, he left the ship and sailed for home as a passenger in the light frigate John Adams. He reached New York on February 25, 1805 to discover he was a national hero and would receive a gold medal from Congress.

Preble next oversaw construction of two gunboats and two bomb ketches at Portland, Maine and Newburyport, Massachusetts. He helped design both types. The four vessels were operational by the end of September 1806. Even before they were launched, the Navy Department contracted directly with Preble for the construction of nine more gunboats. In the winter of 1806 to 1807, Preble’s health collapsed and he made plans to move south to a more tolerable climate. He never made the move, however, and did not improve. Edward Preble died in his Maine home on August 25, 1807.