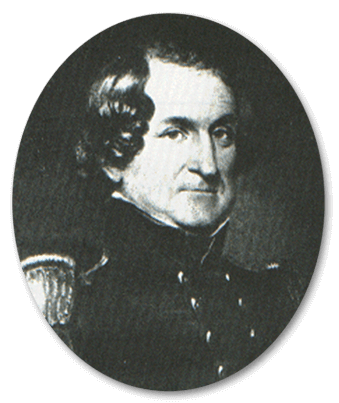 Born in Virginia in 1788, Foxhall Alexander Parker received his midshipman’s warrant on January 1, 1808. At the outbreak of the War of 1812, he was serving on the schooner Nautilus when, on July 17, a British squadron captured the ship and her crew. Soon repatriated, Parker was promoted to lieutenant on March 9, 1813. He was ordered to the Brooklyn Navy Yard on December 1, 1817.

Parker first joined Constitution on March 17, 1821 as first lieutenant. Shortly thereafter, the ship sailed for the Mediterranean as squadron flagship under Commodore Jacob Jones. In October, Parker became Jones’ flag captain (chief of staff) and remained with the ship until her return to New York in 1824. Promoted to master commandant in March 1825, Parker commanded the schooner Porpoise and cruised off the Northeast coast until 1826. In August 1828, Parker put to sea in command of the new sloop-of-war Fairfield. Assigned to the Mediterranean Squadron, Fairfield protected American commerce and strengthened diplomatic relations with the coastal countries until May 5, 1831. Parker was promoted to captain on March 3, 1835.

Parker rejoined Constitution, this time in command, in July 1842. Now in the Home Squadron, he took “Old Ironsides” to sea on a training cruise. The constant motion of the sea opened up seams that had not been attended to since her return from the Pacific in 1841, and Parker was forced to return to Norfolk. The Navy Department lacked the funds to repair Constitution immediately and she was placed into ordinary. Parker and the entire crew transferred to the frigate Brandywine on February 16, 1843.

Parker received orders to take Brandywine and sloop-of-war St. Louis to China, where U.S. Diplomat Caleb Cushing was to negotiate a commercial treaty. The parties signed the Treaty of Wanghia on July 3, 1844. Brandywine arrived back in the U.S. in 1846, and Parker received a gift of a silver plate from the American merchants in China for his efforts on their behalf. He then came ashore to command the Boston Navy Yard until 1849. Parker’s career ended on September 13, 1855, when he was placed on the reserve list in the navy’s service-wide effort to reduce the number of senior officers and improve the chances of promotion for their juniors. He died a little more than two years later on November 23, 1857 at Philadelphia, Pennsylvania.