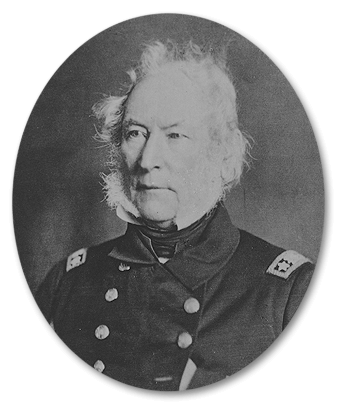 Born in Ireland in 1788, George Read soon immigrated to Pennsylvania with his family. He received his midshipman’s warrant on April 2, 1804, but was not ordered to active duty until 1806 when he joined the brig Vixen. In July 1807, he transferred to the schooner USS Revenge, and then to the frigate President in November 1809.

Read served on Constitution three different times in his career. In 1809, Read served aboard Constitution as lieutenant, and then went on to command the bomb ketch Vesuvius.

He returned to Constitution as lieutenant in July 1812 and participated in the ship’s victory over HMS Guerriere. Captain Isaac Hull sent Read to accept the British ship’s surrender. The next morning, Read reported Guerriere too badly damaged to save; it was scuttled instead. As soon as Constitution reached Boston, he transferred to USS United States, and in October participated in that frigate’s victory over HMS Macedonian. The two actions netted him Congressional silver medals. His career continued with an assignment to the light frigate John Adams in April 1813. He commanded the schooner Scorpion in May 1813, and then the schooner Vixen in September. In April 1814, he traveled to Sackets Harbor, New York to take command of the schooner Conquest. He was on Boston Station from June 1815 to August 1817, during which time he was promoted to master commandant, and given command of the new sloop of war Hornet. He was stationed at New York from 1821 until 1825 when he received his promotion to captain and took command of the new frigate Brandywine.

Ordered to join the Mediterranean Squadron, Read first sailed Brandywine to northern France with the Marquis de Lafayette, who had been visiting the United States. After arriving at Port Mahon, Minorca, he found the bulk of the squadron in winter quarters, and began to prepare his ship for the coming sailing season. Constitution was then in the final stages of a major overhaul and was in the care of a first lieutenant. Because Constitution was almost ready for sea and Brandywine was just beginning repairs, Commodore Rodgers had Read leave his ship with his first lieutenant and take command of “Old Ironsides” on January 23, 1826. On February 21, he was replaced by a new permanent captain, and returned to Brandywine, having spent his entire time in command of the famed frigate at anchor.

Read served as Constitution’s third lieutenant during the battle with HMS Guerriere on August 19, 1812. When the British ship surrendered, Read took a boat over and accepted the surrender of Captain James Dacres. The next morning he reported Guerriere too badly damaged to save, and scuttled the ship. As soon as Constitution reached Boston, he transferred to USS United States, and in October participated in that frigate’s victory over HMS Macedonian. The two actions netted him Congressional silver medals.

Commodore Reed’s service was commemorated in a sidewheel steamer (1863).