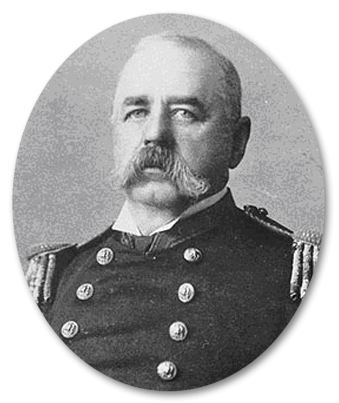 Henry L. Howison was born in Washington, Indiana on October 10, 1837. He entered the U.S. Naval Academy in September 1854 and graduated in June 1858. During the next three years he served on the steam frigate Wabash, the gunboat Pocahontas, and the steam sloop Pawnee. He became the executive officer of three South Atlantic Blockading Squadron ships: the side-wheel steamer Augusta and the monitors Nantucket and Catskill. He then received command of the sidewheel steamer Bienville in the Gulf of Mexico. In March 1865, Howison was appointed to the rank of lieutenant commander. A year later, he was sent to the Washington Navy Yard for ordnance inspection duty. After a year he transferred to the screw steamer Pensacola on the Pacific Station as a navigator and then executive officer.

From 1868 to 1872, Howison rejoined the Washington Navy Yard and then the U.S. Naval Academy. Between 1870 and 1871 he was in charge of all vessels at the Academy, and was senior instructor aboard the stationary school ship Constitution.

Promoted to commander, Howison commanded the gunboat Shawmut from 1873 to 1875. He returned to the U.S. Naval Academy and worked there until the 1880s. After service at the Academy, Howison was promoted to captain, and in 1886 he commanded the screw sloop Vandalia. Two years later, Howison was appointed to president of the Steel Inspecting Board. In 1890, he moved to the Lighthouse Board. He served as commandant of the navy yard at Mare Island, California, until appointed to command the new battleship Oregon in 1896. From 1897 to 1899, Howison served as commandant of the Boston Navy Yard. He was promoted to rear admiral in 1898 and retired in October 1899. Howison died in New York in December 1914.