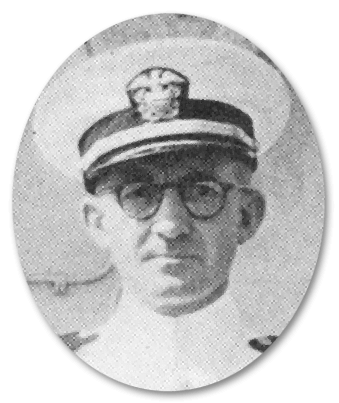 Hermann P. Knickerbocker was born in Springfield, New York, on June 25, 1896. Because of the pressing need for new officers created by World War I, he, along with the rest of his class, was commissioned from the U.S. Naval Academy on October 1, 1918, a year early. Knickerbocker was then promoted to lieutenant junior grade on July 1, 1919. He first served in the new destroyer Putnam (DD-287), which was employed in routine operations in the Caribbean. In 1922, he transferred to the destroyer USS Sicard (DD-346) and saw service in the Asiatic Fleet, including recovery operations following a serve earthquake in Japan in August 1923. After two years ashore in the Third Naval District, Knickerbocker spent the next two in the fleet oiler Kanawha (AO-2) in the Pacific Fleet. Returning to San Francisco in 1929, he was assigned to the battleship California (BB-44) in 1931 for routine training operations in the Pacific. After a year in charge of the Hydrographic Office in Norfolk, Virginia, he was assigned to the new gunboat Erie (PG-50) in 1936 for three years of training operations.

Knickerbocker joined USS Constitution in August 1939 as “senior officer on board” at a time when the ship was out of commission. As the result of President Franklin D. Roosevelt’s executive order of August 24, 1940, the ship was placed in commission and Knickerbocker became her commanding officer. He remained in that billet for just over a year. During that time, the ship was given the administrative designation “IX-21,” meaning “miscellaneous auxiliary #21” on the navy’s list of ships.

Returning to the modern fleet in 1941, Knickerbocker joined the transport President Adams (AP-38) in the Pacific. He transferred to the transport Rochambeau (AP-63) as executive officer and participated in the latter phases of the Guadalcanal operation, in which his ship functioned as a casualty evacuation ship. After just six months, he was brought ashore on the staff of the Caribbean Sea Frontier, and remained there until March 1944, when he went back to sea in the attack cargo ship Alcyone (AKA-7), and supported the later amphibious assaults in the Pacific. In August 1945, he became commanding officer to the transport George F. Elliott (AP-105) and made four “Magic Carpet” voyages across the Pacific to bring troops home. From June 1946 until his retirement in December 1950, he was on shore duty. Knickerbocker died on December 24, 1963 in Jacksonville, Florida.