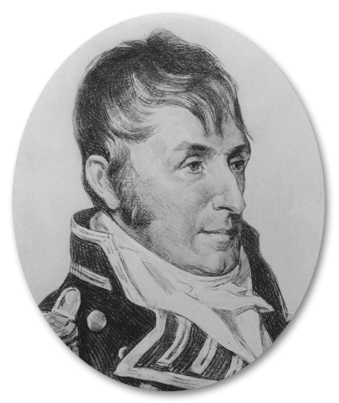 Jacob Jones was born near Smyrna, Delaware in March 1768 and was orphaned at the age of 4. He studied medicine and practiced as a doctor, and later was appointed clerk of the Delaware Supreme Court. At age 31, shortly after losing his wife, he received a midshipman’s warrant despite being twice as old as most entering midshipmen. He served first aboard USS United States in the Quasi-War with France, and then in the corvette Delaware. After being commissioned a lieutenant on February 27, 1801, he had a brief assignment to the corvette Ganges, which was soon laid up. He next was assigned to the frigate Philadelphia, which ran aground in Tripoli Harbor and was captured by the Tripolitans in October 1803. He and the crew remained prisoners until June 1805. Following a long period of shore assignments, Jones was promoted to master commandant in 1810 and given command of the sloop-of-war Wasp. In October 1812, he captured HMS Dolphin, and the next month fought a brutal battle against HMS Frolic. Unfortunately, HMS Poictiers appeared while Jones was repairing battle damage and captured Wasp. Soon exchanged, he was promoted to captain and made commander of the newly captured frigate Macedonian. Trapped by the British blockade at New London, Connecticut, Jones finally was ordered to Lake Ontario, where he took command of the frigate Mohawk. Early in 1815, he transferred to the new frigate Guerriere, and participated in the second Barbary War as part of Commodore Stephen Decatur’s squadron.

Late in 1820, Captain Jones received orders to outfit Constitution and proceed to the Mediterranean to take command of the squadron. Shortly before sailing in 1821, he was directed to use the ship to test out a device called a “propelling machine.” Designed by Sailing Master Biscoe Doxey, the device was a set of temporary man-powered paddle wheels that a ship might use if faced with adverse winds, as when trying to leave port. Jones conducted the test and the ship attained a speed of 3.5 knots. Jones took the propelling machine with him to give it further testing, but it never was used again. The main occupation of the small squadron was to ensure the free movement of American merchantmen. Jones and Constitution returned to the United States in the summer of 1824.

For the next 26 years, Jones alternated between shore and sea commands, including the Baltimore and New York Naval Stations, membership on the Board of Naval Commissioners in Washington, D.C., and command of the Pacific Squadron. Jones took command of the Naval Asylum in Philadelphia in 1847, and he died there on August 3, 1850. He was buried in Delaware.