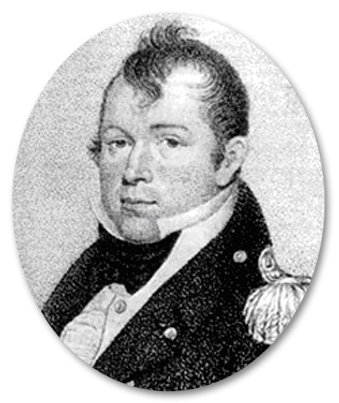 Jesse Duncan Elliott was born in Hagerstown, Maryland on July 14, 1782 to Robert and Ann (Dunan) Elliott. After his father, an army contractor, was killed by members of a tribal nation in Ohio, the family moved to Carlisle, Pennsylvania, where Elliott attended school and studied law. Securing a midshipman’s warrant in 1804, Elliott saw service in the Mediterranean Squadron aboard the frigate Essex near the end of the first Barbary War. He was serving on the frigate Chesapeake when HMS Leopard stopped and boarded the ship in June 1807. Promoted to lieutenant in 1810, he served on the schooner Enterprise.

In 1812, Elliott was ordered to Sackets Harbor, New York, under the command of Commodore Isaac Chauncey. Posted to Lake Erie, on October 8,1812, he led a raid on the British side of the Niagara River that resulted in the capture of two small vessels. As news from the frontier had been largely negative until this point, Elliott’s friends persuaded Congress to vote him a gold medal in celebration. Early in 1813, Master Commandant Oliver Hazard Perry took command of a squadron on Lake Erie. Elliott, now promoted to master commandant, was the next senior officer. During the Battle of Lake Erie on September 10, 1813, Perry commanded the squadron from the brig Lawrence. Elliott, in command of the brig Niagara, held back and did little to support his commander in battle. Perry’s ship became badly damaged, so he took command of Niagara while Elliott was dispatched by boat. In the end, the entire British sqaudron surrendered. Feeling magnanimous in victory, Perry did not criticize Elliott in his report. Elliott’s friends once again persuaded Congress to award him a gold meda, but it was not without controversy as a growing number of other participants made their criticisms known.

Shortly after the close of the War of 1812, Elliott took command of the new sloop-of-war Ontario, and served with Commodore Stephen Decatur in the brief Algerine War. In 1818, he was promoted to captain, and for several years was involved in a series of survey and inspection boards. After serving in the Brazil Squadron, he commanded the sloop-of-war Cyane from 1827 to 1829, and served in the West Indies Squadron from 1829 to 1833.

Elliott took command of the Boston Navy Yard in 1833. Constitution was beginning her first major restoration and, to impress President Andrew Jackson, Elliott had a full-length figurehead of Jackson carved and installed on the ship’s bow. Anti-Jackson Bostonians were outraged. To underscore the point, a local sea captain named Samuel Worthington Dewey climbed aboard on the night of July 2, 1834 and beheaded the figure. Jackson was infuriated and embarrassed by the controversy, but no charges were filed. Elliott received orders to sail Constitution in command of the Mediterranean Squadron.

The following years, from 1835 to 1838, were a surreal experience for Constitution‘s crew as Elliott repeatedly ignored regulations and abused his authority. He took advantage of the annual circuits of Mediterranean ports to sightsee and gather memorabilia. Along the way, Elliott acquired antiques and “exotic” animals, including donkeys, a set of papal busts, a stuffed ibis, a pair of Roman sarcophagi, antique coins, and large marble spheres. He toured parts of the Middle East with an entourage from the ship and swam in the Dead Sea. He accepted unauthorized gifts from the Mameluke ruler of Egypt. He strong-armed his crew into buying him a set of plates. When a midshipman was sorely wounded in an unauthorized duel, Elliott abandoned him without funds in a Turkish port. And on his last circuit prior to returning to the U.S., Elliott encumbered the gun deck with stalls to contain his menagerie of hogs, sheep, horses, and donkeys – all without the Navy Department’s approval. When the ship returned to Norfolk, Virginia in July 1838, he faced down a mutiny when he delayed the payment and discharge of the crew.

As the bizarre tale of his Constitution voyage became known, Elliott was court-martialled in 1840 and found guilty on five counts. He was sentenced to four years suspension from service and loss of pay. The loss of pay was rescinded and the suspension shortened, thanks to his political friends. When he was restored to duty in December 1844, Elliott was made commandant of the Philadelphia Navy Yard. He died in that office the next December.