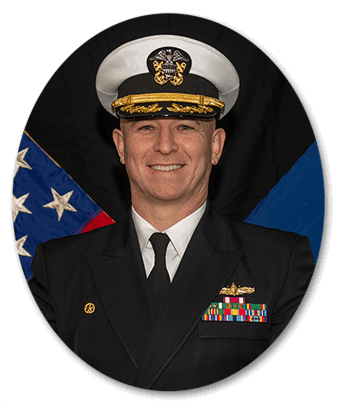 John Benda was born in Boston and grew up in Dedham, Massachusetts. He graduated from Dedham High School in 1997. Benda attended Worcester Polytechnic Institute on a Reserve Officers’ Training Corps (ROTC) scholarship and studied mechanical engineering. Upon graduating in 2001, he was commissioned an ensign in the United States Navy. He then attended the Naval War College in Newport, Rhode Island, for six months of surface warfare school.

Benda was assigned to USS Ashlandem as a communications officer and was deployed in early 2003 as part of Operation Iraqi Freedom. After returning to Virginia, Benda was assigned to Amphibious Squadron 7 in San Diego as assistant operations planner. He served as part of the team providing humanitarian assistance and disaster relief following the 2005 tsunami that affected Indonesia, Sri Lanka, and Thailand. He was awarded the Humanitarian Service Medal for his service on that mission.

Following a brief shore duty, Benda was reassigned to USNS GySgt Fred W. Stockham where he supported special operations units in the Philippines. Upon his return to the United States, Benda attended the University of San Diego and earned a Master’s of Science in leadership. Benda then served as operations officer aboard USS Gary and then USS Boxer.

After earning a second Master’s degree in 2012 from the Naval War College in Rhode Island, Benda became an instructor at the surface warfare officer school at Newport Naval Station, where he taught expeditionary warfare. He then returned to San Diego for duty as an engineer. Following that assignment, Benda returned to Massachusetts and received orders to USS Constitution as executive officer.

After serving as executive officer, Benda assumed command of USS Constitution on February 29, 2020. During his tenure, USS Constitution was closed for a period of time during the COVID-19 pandemic. The crew began offering virtual tours of as a way of connecting with the public until the ship could safely reopen. Benda served as commanding officer until January 21, 2022.