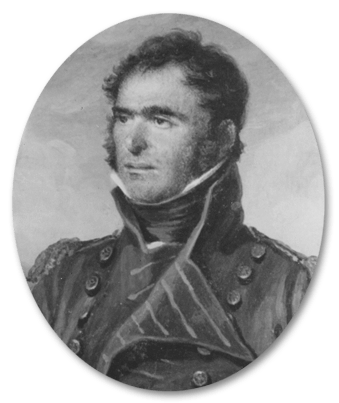 John Rodgers was born on July 11, 1773 near Havre de Grace, Maryland. Intrigued by the small vessels arriving at the nearby port, he abandoned school and went to Baltimore, where he apprenticed to a ship’s master. At the end of his apprenticeship, he was rated a mate and, not long thereafter, became a master in his own right. Offered a lieutenant’s commission in 1798, he joined the frigate Constellation under Captain Thomas Truxtun.

On February 9, 1799, during the Quasi-War with France, Constellation defeated the French frigate L’Insurgente. Truxtun made Rodgers the prizemaster, and he successfully navigated the prize home. He was promoted to captain and given command of the sloop-of-war Maryland. In 1801, he delivered to France the ratified peace treaty ending the Quasi-War. Rodgers next commanded the frigate New York in the Mediterranean Squadron from 1802 until the spring of 1803. Rodgers sailed back to the Mediterranean aboard the frigate Congress with an augmented squadron in 1804.

In November 1804, during the first Barbary War in North Africa, Rodgers exchanged Congress for Constitution. After a winter of repairs, the American squadron reassembled off Tripoli to renew the assault begun the previous year. Rodgers relieved an ailing Commodore Samuel Barron as squadron commander, and then participated in negotiations with the Bashaw of Tripoli. The treaty with Tripoli was drawn up in Rodgers’ cabin aboard Constitution. During the following months, Rodgers took the squadron to Tunis and Algiers to convince those governments to keep peace with the United States, and then began sending many of the navy vessels home. He made the rounds of Mediterranean ports, spreading the news of peace between the United States and the Barbary powers of Tunis, Algiers, and Tripoli. In June 1806, he exchanged commands with Captain Hugh G. Campbell on Essex and headed home.

In 1809, Rodgers returned to Constitution while the ship patrolled the east coast, and was stationed in New York.

Rodgers next commanded the New York Station. Late in 1808, a number of larger units of the navy were activated for better high seas law enforcement, including Constitution, which had returned from the Mediterranean a year before and gone into ordinary at New York. Rodgers recommissioned the ship in March 1809, and for the next 15 months made periodic sorties from New York harbor. When he encountered President, under Captain Isaac Hull, he used his seniority to demand an exchange of ships. President was several years newer and reputed to be the fastest of the American frigates.

Shortly after the War of 1812 began, Rodgers’ squadron sailed in pursuit of a British convoy, but the cruise proved fruitless. It set the pattern for Rodgers’ wartime service: his several cruises failed to gain him a duel with another frigate and the consequent glory. When the British threatened Baltimore in 1814, Rodgers left President and took a detachment of seamen south. His gunners contributed to the city’s successful defense, and the grateful citizens awarded Rodgers with a silver service valued at $4000. Rodgers next went to Philadelphia to fit out the new frigate Guerriere, but the war ended before she could sail.

After the war, Rodgers headed the Board of Naval Commissioners, a panel of senior captains designed to assist the Secretary of the Navy with administration and operations. Rodgers held this position for the rest of his career, barring a two-year period in the mid-1820s when he returned to the Mediterranean as squadron commander. He died on August 1, 1838 and was interred in the Congressional Cemetery in Washington, D.C.