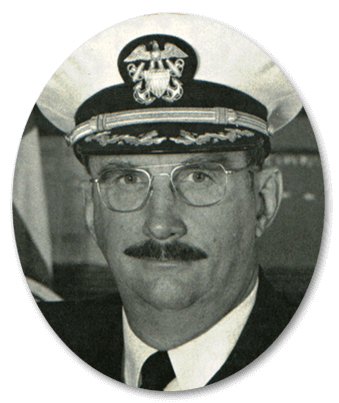 Joseph Brown was born in Warwick, Rhode Island on September 28, 1939. He was commissioned an ensign in the navy from the Officer Candidate School in his home state. He was first assigned to the salvage ship Grapple (ARS-7) in the Pacific Fleet, and then served as executive officer in the destroyer Purdy (DD-734), operating on the East Coast and in the Caribbean. Brown was promoted to lieutenant junior grade on May 17, 1963. He next served in the tank landing ship Talbot County (LST-1153) as operations officer, and was promoted to lieutenant in July 1965. The ship operated on the East Coast and in the Caribbean throughout his tour. His next assignment was the guided missile frigate William V. Pratt (DLG-13) which, in 1967, deployed from the Atlantic Fleet for a tour in waters off Vietnam. Upon the ship’s return to the Atlantic, early in 1968, Brown went to the destroyer escort Hammerburg (DE-1015) as executive officer. When promoted to lieutenant commander in August 1969, he transferred to the guided missile frigate Coontz (DLG-9) in the Pacific Fleet. From then until the mid-1980s, Brown attended several postgraduate schools in England and the United States, and served in a series of staff billets in Europe, the Middle East, and on the East Coast of the United States.

Brown took command of Constitution on June 22, 1985, and soon became of one her most popular modern skippers. He was the first of the ship’s captains to have a woman regularly assigned to ship’s company: Yeoman 2nd Class Rosemarie Lanam came aboard in the fall of 1986. Brown was nearing the end of his command tour when he died unexpectedly on July 8, 1987, becoming the second Constitution captain to die while in command.