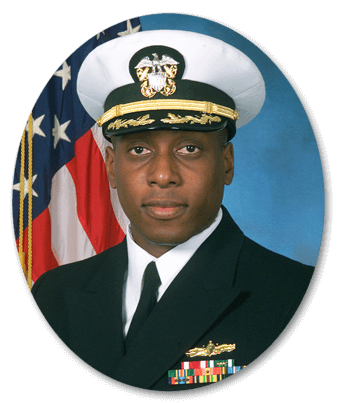 Lewin C. Wright was born in London in April of 1962. He was one of four children born to Lenworth and Melvina Wright, who had immigrated to England from Jamaica during the 1950s. The family immigrated to the United States and settled in Brooklyn, New York in 1975. Wright graduated from Brandeis University and was commissioned through Officer Candidate School in 1985. From June 1986 to May 1989, he served as electrical officer and electronic warfare officer aboard USS Vancouver, and then served as navigator aboard USS Buchanan from July 1989 to March 1991. Wright worked ashore as an officer recruiter in San Francisco through 1992, and then completed the Surface Warfare Officer’s Department Head Course. Following a stint as operations officer aboard USS Lewis B. Puller, Wright was assigned to USS Robin, where he served as executive officer until May 1998. Between June 1998 and June 1999, Wright studied at the Army Command and General Staff College in Leavenworth, Kansas, where he completed Joint Professional Military Education phase one. At the same time, he earned a Master’s degree in business administration from Benedictine College. Wright next served as executive officer of USS Samuel Eliot Morison until December 2000, after which he was on the staff of the Chief of Naval Operations in Washington, D.C.

Wright assumed command of Constitution in July 2003 as the ship’s first Black commanding officer. During his time aboard, Wright improved operations to better meet the command’s mission to protect, preserve, and promote the ship for the benefit of the American people. He established new security measures in the wake of the attacks on September 11, 2001, but also expanded tour operations and public access to the ship. He initiated the ship’s Bunker Hill Day/ Military Appreciation Day Turnaround Cruise. Wright and his command enthusiastically supported Constitution’s annual Chief Petty Officer (CPO) selectee indoctrination events. More than 600 CPO selectees lived aboard the ship for week-long programs.