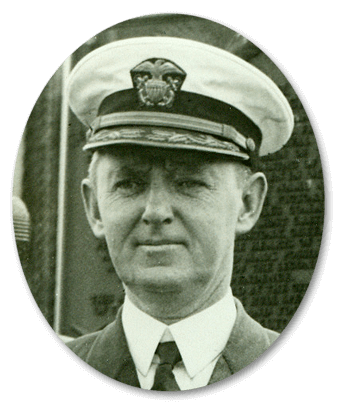 Born in Maine on November 6, 1883, Louis Gulliver attended public schools and then entered the U.S. Naval Academy in June 1903. He was commissioned an ensign four years later. He joined the battleship Illinois (BB-7) in August 1907 and participated in the circumnavigation of the Great White Fleet. He left the ship after its return to the United States early in 1909. He again served in a battleship, this time USS Georgia (BB-15), at the outbreak of World War I. One of the oldest battleships in the fleet, Georgia’s wartime service was limited to tactical and gunnery exercises on the East Coast in preparation for combat service, if called. Gulliver got command of the light minelayer Murray (DM-2), a converted destroyer, in 1920, and was involved in development projects related to mine and antisubmarine warfare until his ship was decommissioned in 1922. Shore duty in the Boston recruiting office followed. He was serving as executive officer of the old cruiser Rochester (CA-2), protecting the interests of American citizens in strife-torn Haiti, when he received orders to command Constitution.

Gulliver received orders to report to Constitution in March 1931, just as the old frigate was completing a four-year restoration. For the next three years, on a National Cruise to thank American citizens for their support of the ship’s 1927 to 1931 restoration, “Old Ironsides,” towed by the minesweeper USS Grebe, toured the United States, proceeding first north to Maine and then south along the East and Gulf Coasts. At every stop, crowds from the surrounding countryside poured in to see the famous frigate, which was greeted also with a variety of parades, demonstrations, dinners, and receptions. USS Constitution transited the Panama Canal between December 27, 1932 and January 7, 1933 to begin a tour up and down the West Coast. Her reception there was as warm as it had been on the East Coast. By the time Constitution returned to Boston on May 7, 1934, Gulliver had proven himself an able public relations representative of the navy while hosting more than 4.6 million visitors. He decommissioned the ship on June 8, 1934.

Gulliver himself retired in the following year. He died in Bethesda, Maryland on April 17, 1962.