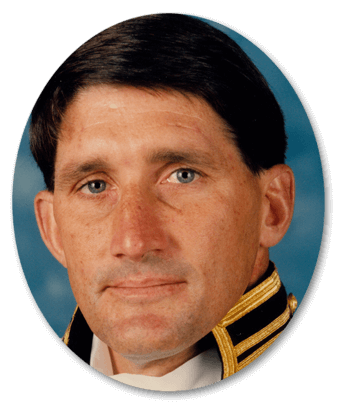 Michael Beck was born on October 2, 1954 in Lewistown, Pennsylvania. He graduated from the U.S. Naval Academy as an ensign in 1977. Beck took classes at Johns Hopkins University and Harvard University, and earned a Master’s degree in national security strategy from the National War College, which is part of the National Defense University in Washington, D.C. For nearly a decade, Beck held positions of increasing responsibility during shore and sea tours. Beck served as a navigator and anti-submarine warfare officer aboard the destroyer USS Dahlgren. On June 8, 1979, he was promoted to lieutenant junior grade. Beck was selected for an exchange program with the British Royal Navy and served two years at the Royal Navy School of Maritime Operations in Southwick, England. On July 1, 1987, Beck was promoted to lieutenant commander. In 1987, Beck became the first member of his graduating class to command a ship, the hydrofoil gunboat USS Pegasus, which was commissioned to interdict drug runners from American shores. Under Beck’s command, Pegasus earned the Battle Efficiency Award and was nominated for the Navy’s Arleigh Burke Award for most improved ship in the Atlantic Fleet. Beck was promoted to commander on September 1, 1992. After completing his duty on Pegasus, Beck was assigned to the Pentagon as an adviser on the staff of the Chief of Naval Operations. In 1992, Beck was selected to be adviser for strategic planning at the U.S. Naval Academy. He facilitated the creation of the first-ever strategic plan for the Naval Academy, assisted in establishing the Faculty Senate, and helped develop a principle-based leadership curriculum for midshipmen at Annapolis.

Beck commanded Constitution from a symbolic command to an active administration. He also changed the way public tours were given, which reversed a declining trend in visitation to the ship. To celebrate its bicentennial in July 1997, Constitution sailed under its own power for the first time in 116 years. To prepare for such a journey, Beck created the “Pennies Campaign,” which raised over $500,000 from schoolchildren across the country to buy new sails and prepare for sea. Beck trained the crew and triumphantly sailed the ship to Marblehead Harbor on July 20-21, 1997. He also invited former Commanding Officer David Cashman to be aboard as the “honorary navigator.” In 1997, Beck was awarded the William J. Diffley award, which honors departing directors of Historic Naval Ships Association Fleet Member organizations who have contributed in some great measure to the success of their historic ships. He also was awarded the Legion of Merit. As a result of his accomplishments on USS Constitution, Beck was the youngest person ever selected for and awarded the Arleigh Burke Leadership Award by the Navy League of the United States.

In 1997, Commander Beck retired from the U.S. Navy after 20 years. He pursued his passion for education and taught history and government at the Fay School in Southborough, Massachusetts. In 1999, he became the school’s director of development and in 2001 he became the assistant head of school and director of external affairs and strategic planning. In 2007, Beck became head of school at the Dunn School in Los Olivos, California.

In December 2020, Beck received his Doctorate in strategic leadership from Regent University, Virginia Beach, Virginia. He was appointed head of The Master’s School in West Simsbury, Connecticut, in July 2021.