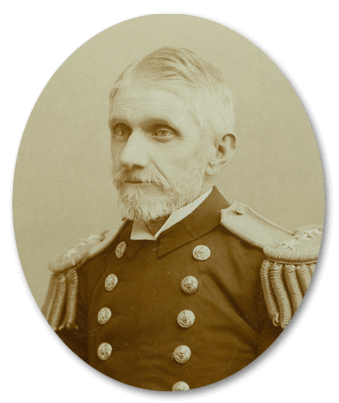 Oscar Stanton was born in Sag Harbor, New York, on July 18, 1834. Fifteen years later he entered the navy as acting midshipman and graduated from the U.S. Naval Academy in 1855. He served in Paraguay, Africa, and the Pacific before taking command of the steamer USS Tioga in 1862 and the steam gunboat USS Pinola from 1863 to 1864, when he participated in the Battle of Mobile Bay. After two years on ordnance duty in New York, Stanton was assigned to the Naval Academy where he served another two years before being promoted to commander on December 12, 1867 and given charge of the steamer USS Tahoma in the North Atlantic Squadron. Over the next seven years he transfered to the store ship USS Purveyor, the gunboat USS Monocacy, and the screw gunboat USS Yantic before being promoted to captain in 1879 and transferring to the Naval Academy.

At the Academy, Stanton became captain of Constitution. From October 1, 1879 to June 14, 1881, his letters to the Secretary of the Navy offer a glimpse of Constitution’s movements over his two year command. In October 1879, the ship departed New York for Hampton Roads, off south-east Virginia, to begin a series of training voyages. On November 17, after reporting to the Norfolk Navy Yard for repairs not completed in New York, Stanton wrote to the secretary commending the actions of a number of members of his crew after a boy fell overboard. The Secretary replied offering a letter of commendation to one junior member of crew and the Medal of Honor to Ship’s Corporal James Thayer, who swam to rescue the boy. On December 8, Stanton began a voyage to Panama via the Caribbean Islands of Guadeloupe, Martinique and St. Croix. Constitution arrived at Guadeloupe on the December 24, but fled that port due to fears of yellow fever and continued to Fort Royal Bay, Martinique. The training vessel finally reached St. Croix on January 10, 1880. Stanton undertook a number of training cruises along the east coast of the U.S. and into the Caribbean until 1881 when Constitution was handed over to Edwin Malcolm Shepard.

In 1884, Stanton took command of the screw frigate USS Tennessee, the flag ship of the North Atlantic Station and a year later was placed in charge of the Naval Station in New London. By 1893, Stanton was commanding the South Atlantic Squadron as rear admiral aboard his flagship, the sloop USS Kearsarge, before she was wrecked in the Gulf of Mexico. He retired in 1894, but later took command again at the Naval Station during the Spanish American War. Real Admiral Stanton died on July 5, 1924 in New London, Connecticut.

Oscar Stanton’s service has been recalled in the naming of a destroyer escort (1943).