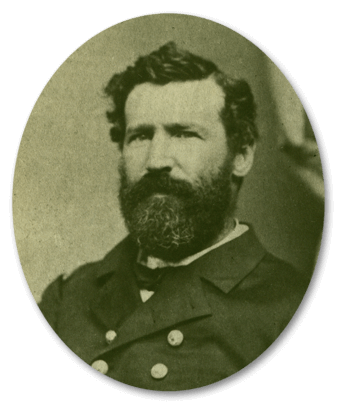 Philip Carrigan Johnson was born on November 21, 1828 in Fryeburg, Maine. He spent the first part of his life in Washington, D.C. with his father, and there entered the U.S. Navy as midshipman on August 31, 1846. During the Mexican War, he was present at the battles of Veracruz and Tuxpan. Between 1847 and 1848, Johnson served on the ship-of-the-line Ohio of the Pacific squadron. While aboard Ohio, he saved the life of a fellow sailor who had fallen overboard by quickly diving in and pulling him to the ship. For his actions, Johnson received a highly complementary report from his commander. From there he advanced to the U.S. Navy School (the early name for the U.S. Naval Academy). In 1850 he served aboard the frigate Congress in the Brazil squadron before returning to graduate from the U.S. Naval Academy in 1852. He was promoted to passed midshipman on June 8, 1852 and was assigned to the store-ship Fredonia, where he served two years before transferring to the Coast Survey. During the period on Coast Survey, on September 16, 1855, Johnson was commissioned as lieutenant. From 1859 to 1861, he was assigned to the steam sloop San Jacinto, in which he served off the coast of Africa. After leaving San Jacinto, Johnson commanded the steamer Tennessee in the Western Gulf squadron until 1863. While on Tennessee, Johnson was present at the battles of Fort Jackson and St. Philip, the decisive engagements to possess New Orleans during the American Civil War.

Johnson briefly returned to the Naval Academy,where he commanded Constitution from April 16, 1864 to February 16, 1866. He sailed the ship from Newport back to Annapolis after the American Civil War ended.

For the next two years, Johnson served on the screw sloop Sacramento on special service to the North Pacific squadron. Commissioned as commander in February 1867, he became fleet captain of the Pacific Squadron between 1868 and 1870. Four years later, Johnson was assigned to be captain. As a result, he commanded the screw slop Omaha and the steam sloop Richmond, both in the South Pacific Squadron between 1874 and 1876. In 1877, he was ordered to duty as captain of the navy yard in Mare Island, California. He served there until May 1881, when he attended the Torpedo station and in June was ordered to command the training ship New Hampshire. In June 1884, Johnson was ordered to command a training squadron before being commissioned as commodore on July 28, 1884. The following September, he commanded the Portsmouth Navy Yard. Johnson died at his post as commandant of the navy yard on the January 28, 1887.