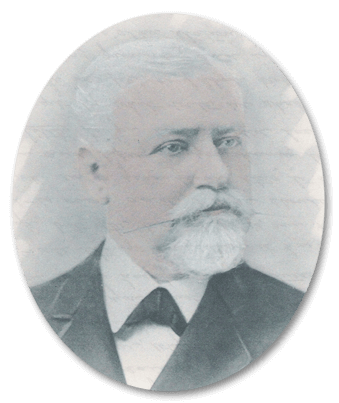 Reigert Lowry was born on July 14, 1826 in La Guaira, Venezuela, where his father was U.S. Consul. He was warranted a midshipman on January 20, 1840 and graduated with the U.S. Naval Academy Class of 1846. He served in the Home Squadron during the Mexican War and participated in operations at Tampico, Tuxpan, Veracruz, Tabasco, Seven Pines, and Alvarado. After serving on the ship-of-the-line Independence in the Mediterranean, he was assigned to the sloop-of-war Plymouth, part of Commodore Matthew Perry’s squadron that opened trade relations with Japan. Promoted to lieutenant in September 1855, he returned to the United States in 1856. Duty in the Brazil Squadron and on the East Coast followed, and he was aboard USS Pawnee when Confederate forces fired on Fort Sumter. He commanded the steamer Freeborn during the amphibious operation at Cape Hatteras. Following further operations in the North Carolina sounds, he became USS Hartford‘s executive officer and participated in the capture of New Orleans and the first attack on Vicksburg. Promoted to lieutenant commander during this time, he took command of the steamer Sciota on the Mississippi. He spent the latter half of the war on special duty in Washington. After his promotion to commander, he commanded the training ship Sabine until 1868. Shore duty was broken up by command of the steamer Severn. Made Captain in 1871, Lowry was ordered to Constitution after a long period of inactivity.

Boarding Constitution at Philadelphia, Lowry was appalled to discover that she was serving as a stationary training ship for apprentice boys, a situation not unlike what he had encountered in Sabine a decade earlier. Considering the assignment an insult to his reputation, he protested vehemently to the Bureau of Naval Personnel and soon had permission to go ashore to wait further orders. His command tour lasted from August 23 to September 5, 1877.

Lowry’s last duty was at the Naval Station at New London, Connecticut. He was promoted to commodore on April 1, 1880, and died on November 25, that same year at the Brooklyn Naval Hospital.

Captain Lowry was commemorated by a destroyer (1944).