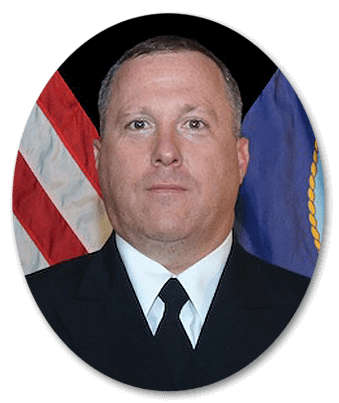 Kearns next attended the Massachusetts Institute of Technology, earning Master of Science degrees in Naval Architecture and Marine Engineering, and Mechanical Engineering. Following his graduation from Department Head School in Newport, Rhode Island in May 2002, he reported to USS Carter Hall (LSD-50) as first lieutenant, deploying in support of operations “Iraqi Freedom,” “Enduring Freedom,” and “Sheltering Sky.” In January 2004, he reported to USS George Washington (CVN-73) as reactor electrical assistant, deploying in support of operations “Iraqi Freedom” and “Enduring Freedom.”

In December 2005, Kearns reported to Naval Reactors Headquarters (NRHQ) in Washington, D.C. He served on USS San Antonio (LPD-17) in early 2008 as the ship’s executive officer. In the summer of 2010, Kearns reported to the staff of Commander, U.S. Second Fleet in the Policy, Requirements, and Experimentation branch. In June 2012, he graduated from the Senior Officer Course at the Naval War College in Newport, Rhode Island with a Master of Science degree in National Security and Strategic Studies. He later worked at the Surface Warfare Officers School Command as the director of Fleet Enlisted Engineering Training for the navy.

After the change of command on August 14, 2015, Kearns was promoted to the rank of captain and served as executive officer on the revolutionary new guided-missile destroyer USS Michael Monsoor (DDG-1001), under construction at Bath Iron Works in Kearns’s home state of Maine. Following completion of construction and successful acceptance sea trials, Kearns turned over his duties as executive officer and moved on to his current position as commanding officer and professor of naval science at the NROTC unit at Maine Maritime Academy and The University of Maine, not far from his hometown.