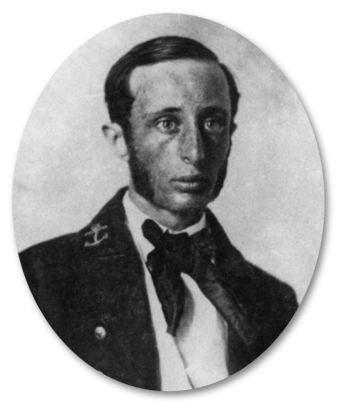 Thomas Eastman was born in New York in 1838. He was appointed to the U.S. Naval Academy on January 31, 1853 and graduated in the class of 1856. Eastman served aboard the steam frigate Wabash from 1856 to 1858 while she was the flagship of the Home Squadron. He was promoted to master in 1859 and commissioned as a lieutenant in 1860. He commanded the steamers Yankee, Don, and Thomas Freeborn in 1861. While commanding those steamers he was involved in numerous sharp engagements with Confederate batteries and guerrillas on the Potomac and Rappahannock Rivers. Eastman commanded and served as the executive officer on the steamer Keystone State, which engaged the Confederate ironclad gunboats Chicora and Palmetto State on January 31, 1863 off the coast of Charleston. Eastman received his promotion to lieutenant commander on September 30, 1862. He served in the South Atlantic Blockading Squadron from 1863 to 1865, and was aboard the monitor Weehawken during the reduction of Fort Sumter and Charleston, South Carolina.

Eastman was senior instructor on the U.S. Naval Academy’s stationary training ship Constitution from February 26, 1866 to November 6, 1867. Eastman was also in charge of the school ship Santee, which was at the Academy from October 1862 to 1912.

Eastman commanded the screw gunboat Penobscot as part of the North Atlantic Squadron from 1867 to 1869. He was promoted to commander on June 19, 1871 and was on duty at the Washington Navy Yard in 1872 and at the Portsmouth Navy Yard from 1873 to 1875. He commanded the monitor Ajax on the North Atlantic Station from 1876 to 1878. Eastman returned to Portsmouth, New Hampshire and worked in the navy yard from 1878 to 1880.