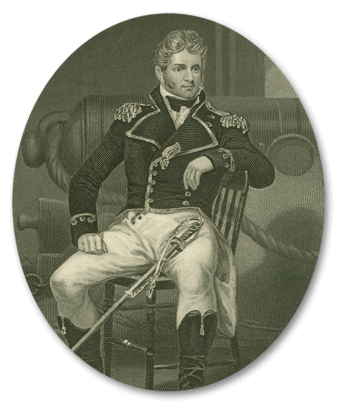 Thomas McDonough, the son of an American Revolutionary War veteran, was born in Delaware on December 31, 1783. Orphaned at age 12, he worked as a store clerk for several years before getting a midshipman’s warrant in 1800. For reasons unknown, his surname became “Macdonough.” He made one cruise during the Quasi-War with France aboard the 24-gun corvette Ganges. He then served in both the Second and Third Mediterranean Squadrons during the Barbary War, and distinguished himself as a volunteer in the crew that destroyed the captured frigate Philadelphia in Tripoli Harbor. Promoted to lieutenant in 1807, he was ordered to the sloop-of-war Wasp and, in 1810, commanded the gunboats on the Connecticut shore. Later that year, he received permission to make a merchant voyage, after which he returned to command gunboats in New England. In October 1812, Macdonough took command of naval forces on Lake Champlain. There followed nearly a year of frantic competition with the British in Canada to achieve control of the lake. In September 1813, Macdonough won a hard fought battle with a British squadron in the Battle of Lake Champlain off Plattsburgh, New York, and prevented their invasion of the state. He was awarded a Congressional gold medal and promotion to captain. From 1815 to 1818, Macdonough commanded the Portsmouth Navy Yard. In 1818, he took charge of the Mediterranean Squadron, and then the ship-of-the-line Ohio at New York until 1823. All through this period he suffered from tuberculosis.

Macdonough took command of Constitution in the 1824 as the ship was undergoing repairs following the completion of a three-year tour in the Mediterranean. He sailed back to the Mediterranean in the fall and “wintered over” in Messina, Sicily. A voyage back to Gibraltar began the sailing season of 1825, and Commodore John Rodgers took command of the squadron. American forces sailed eastward to facilitate a meeting between Rodgers and the Ottoman Capudan Pasha. During the previous weeks, Macdonough’s health had deteriorated markedly, and on October 14, 1825, he had himself relieved of his command of Constitution and made arrangements to return home.

Together with Surgeon William Turk and a number of “invalids” from the squadron, Macdonough sailed for Philadelphia in the merchant brig Edwin. He died on November 10, 1825 as the ship was nearing home. He was buried in Middletown, Connecticut.