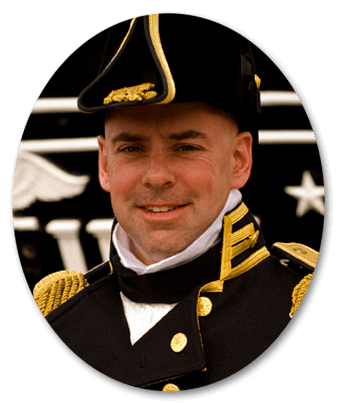 Timothy Michael Cooper was born on November 3, 1970 in Melrose, Massachusetts. He attended the Massachusetts Maritime Academy and, upon graduation in 1992, was commissioned an ensign. His first duty assignment was in the guided missile frigate USS Estocin (FFG-15). In 1996, he was transferred to the destroyer USS Hayler (DD-997), where he served until 1998. Promoted to lieutenant, Cooper next was assigned to Commander, Carrier Strike Group Eight in connection with development of the Tomahawk Afloat Planning System. The Group had participated in operations “Infinite Reach” and “Noble Anvil” by the time he was reassigned to the guided missile cruiser Anzio (CG-68) in 1999. There, he sailed in Arabian waters participating in operations “Enduring Freedom” and “Iraqi Freedom” in the early spring of 2003. After promotion to lieutenant commander, Cooper served on the staff of the Surface Warfare School at Newport, Rhode Island and then attended the Naval War College from 2005 to 2006. He returned to sea duty on the guided missile destroyer Higgins (DDG-76), which included another tour in Middle Eastern waters. From March 2008 until April 2009, he was ashore at the Distributed Training Center, Atlantic, during which time he was promoted to commander.

Cooper took command of Constitution in July 2009 at a time when the ship was undergoing significant historical restoration in preparation for the forthcoming War of 1812 bicentennial. Even as the work proceeded, the ship continued to accommodate visitors, even though this required constant readjustment of where visitors could go safely and how many visitors could be allowed aboard at a time. Cooper oversaw this shifting scene adeptly as the bulwarks surrounding the upper deck were lowered approximately two feet, the waist area of the ship was opened up, and the spar deck relaid, all to further return the ship to her War of 1812 appearance. Outside the ship, Cooper and his crew participated in a variety of community outreach endeavors, both locally and farther afield. For these efforts, the ship received numerous accolades, the principal one being receipt of its fifth Meritorious Unit Commendation.

With the change of command in July 2011, Cooper reported to the Naval War College in Newport to complete Phase II of his Joint Professional Military Education. In 2012, he transferred to Tampa, Florida where he served as the J5 plans chief for the Central Gulf Branch at The United States Central Command (USCENTCOM). During this tour he was promoted to captain. Upon completion of his time in Tampa, Cooper served as the commanding officer and professor of naval science for the Maine Maritime Academy Naval ROTC Unit. Currently, Cooper is assigned to the Naval Leadership and Ethics Center in Newport, Rhode Island, where he serves as the course lead administrator and facilitator for the Division Officer, Intermediate and Senior Leadership Courses.