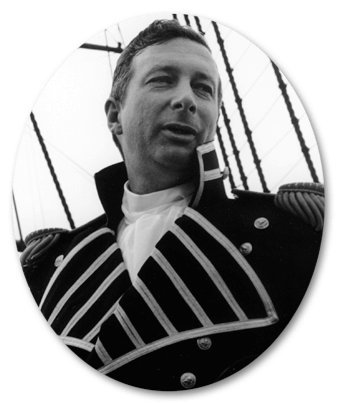 Tyrone Martin was born in Greenwich, Connecticut on June 5, 1930 and attended public schools there. He was commissioned from the Naval Reserve Officers Training Corps (NROTC) unit at the University of Rochester in 1952. His first assignment was to a radar picket destroyer in the Korean War. After a second deployment on the destroyer in East Asia, he was transferred to a tank landing ship for a third Asiatic deployment. He was next assigned to the Third Marine Division as naval gunfire officer, again in East Asia. Returning to the United States in late 1957, he served on two heavy cruisers and a destroyer, making a Mediterranean deployment in each. His first shore duty assignments were attendance at the Naval Intelligence School and Office of Naval Intelligence (ONI). Returning to the Pacific Fleet in 1962, he served on a cruiser-destroyer flotilla staff, then as executive officer and commanding officer of a destroyer, again making deployments in East Asia. Following another tour in ONI, he commanded a destroyer and was chief staff officer of an amphibious squadron, both in the Pacific, and both with tours in East Asia.

Martin took command of USS Constitution on August 6, 1974, when the ship was beginning the second phase of a multi-year restoration. Finding that no one involved had any particular knowledge of the ship, he began his own research program. This culminated in recommendations to the Chief of Naval Operations (CNO) concerning designation of an historically accurate War of 1812-era baseline as the foundation for the restoration, as well as a proposal on how restorations ought to proceed in the future. On December 24, 1975, CNO made both recommendations policy. Another recommendation, this time to Secretary of the Navy J. William Middendorf, resulted in dropping the ship’s curious “IX-21” designation. Another recommendation to Middendorf resulted in the navy’s acquisition of Michel Felice Corne’s 1803 painting of USS Constitution, the earliest known painting of the ship. About that time, it was learned that Queen Elizabeth II planned to visit the ship that year. Martin had two of the ship’s replica 24-pound long guns modified to fire saluting charges in preparation for the Queen’s arrival. In addition, he researched and guided the creation of period uniforms for the crew, encouraged the Bureau of Naval Personnel to establish qualifying standards for sailors assigned to the ship, developed a standard script for sailors leading tours for visitors aboard, and created multilingual brochures to augment the visitor experience. On July 10, 1976, Constitution led a Tall Ships parade into Boston Harbor, firing minute guns from her newly modified 24-pound long guns, and the next day welcomed Queen Elizabeth’s Royal Yacht Britannia, which brought the response, “Your salute was magnificent – Britannia sends.” That afternoon, Queen Elizabeth II and Prince Philip visited the ship. On November 11, 1976, Constitution resumed the early practice of firing single morning and sunset guns daily. For the ship’s efforts during the national bicentennial, Constitution received her first-ever unit commendation. When Martin retired in 1978, he became the first captain since Charles Stewart in 1815 to be decorated for his command tour.

Shortly after he retired, Martin wrote the award-winning book, A Most Fortunate Ship, first published in 1980. He spent a year directing a whale research effort, then became an assistant headmaster at Boston Technical High School while founding an Navy Junior Reserve Officers’ Training Corps (NJROTC) unit that was rated among the top ten in the country. Leaving that program in 1989, he turned to writing more five additional works about Constitution, and also authored a column in Naval History magazine for more than 10 years. Martin’s website about Constitution, called The Captain’s Clerk, was established in 1998. It is now a part of the Library of Congress’ permanent electronic archives. He has continued to make his research available to USS Constitution, Naval History & Heritage Command, and the USS Constitution Museum. In recognition of his efforts, the museum made him an Honorary Life Member and Distinguished Overseer, and presented him with the Samuel Eliot Morison Award. In 2019, Martin received the Dudley W. Knox Medal for Lifetime Achievement in Naval History from the Naval Historical Foundation.