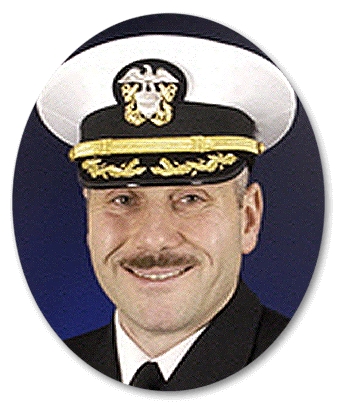 William Bullard III was born in Fall River, Massachusetts in 1968. He attended Worcester Polytechnic Institute, majoring in electrical engineering. While there, he was commissioned from the Naval Reserve Officers Training Corps (NROTC) Class of 1990 at the College of the Holy Cross in July. He began his career in the navy attending Surface Warfare Officer School in Coronado, California. During Operation Desert Storm, he served in the tank landing ship Cayuga (LST-1186) in the Arabian Gulf. He also served in Somalia for Operation Restore Hope. During Operation Southern Watch, he was deployed to Bahrain as a sea combat operations officer, in support of United Nations sanctions against Iraq. Back stateside, he attended Naval Postgraduate School in 1997, earning a Master’s degree in Applied Physics while studying Space Systems Engineering.

Bullard began his command of USS Constitution on May 10, 2007. He had the honor in August 2007 to participate in the ceremony when Captain Isaac Hull’s service sword from the War of 1812 became part of the USS Constitution Museum’s collection. In November 2007, the frigate hosted Royal Navy Lieutenant Commander John Scivier. This was the second time that a commanding officer of HMS Victory, the oldest commissioned warship in the world, met with a commanding officer of USS Constitution, the world’s oldest commissioned warship afloat. In addition, he was chosen as a reading role model as part of “A Salute to Reading is FUNdamental,” a national non-profit program. He read for the Leontine Lincoln Elementary School in November 2007, which was located in his hometown with his aunt as principal. During his 26-month tour, the ship underwent a restoration that brought it closer to its War of 1812 appearance than it had been in over 80 years. Bullard’s command of USS Constitution ended on July 24, 2009.