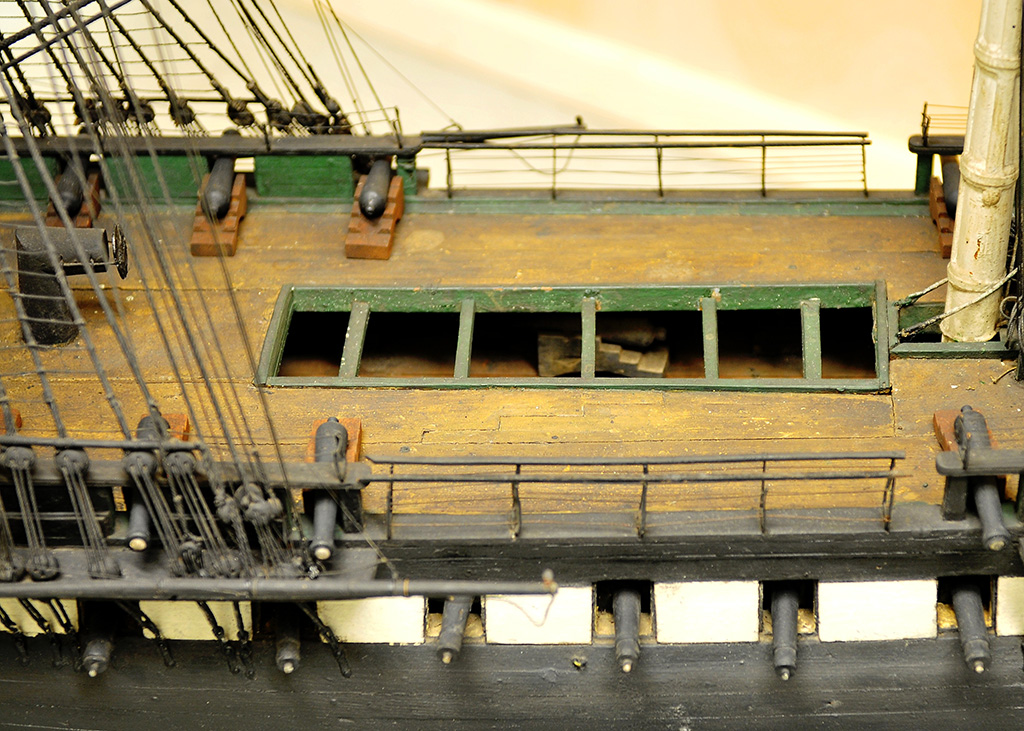 Certainly one of the most popular ships to model has been and continues to be USS Constitution. The earliest known model was built in 1812 by Constitution‘s sailors for their gallant captain, Isaac Hull. The model was presented to the Salem East India Marine Society by Hull on July 7, 1813. Having been built by the sailors who knew the ship so well, the accuracy of the details of fittings on the ship are remarkable. Captain Hull considered it a very correct likeness of his beloved ship.

You can visit the model today on display at the Peabody Essex Museum (PEM) in Salem, Massachusetts.

The story goes that the model was the centerpiece at a celebratory naval banquet in Salem in late 1813. During the course of the evening, many toasts were made and the tiny guns of the model were fired in salute. Tragically, though perhaps not surprisingly, the rigging was burnt as a result. In PEM’s archives is a “Receipt for Bill of repair” dated May 7, 1814. The bill, for 12 dollars, was to pay the British prisoners of war who had affected repairs to the model’s rigging.

Since the early 20th century, this model has been used as a three-dimensional primary resource to guide the ongoing restoration of Constitution toward her War of 1812 appearance.

USS Constitution‘s first true restoration took place between 1906 and 1907 in the Charlestown Navy Yard. Naval Constructor Elliot Snow used the 1812 model to inform the reconstruction of the ship, including removing Constitution‘s receiving ship barn, installing a partial sailing rig, opening the spar deck waist bulwarks alongside the main hatch, and lowering the upper bulwarks above the spar deck gun ports. Cosmetically, at least, Constitution once again took on the appearance of an 1812 warship. Constitution‘s most significant 20th century restoration occurred from 1927 to 1931 in the Charlestown Navy Yard. The U.S. Navy, in its final report on the project, admitted to “renewing” 85 percent of the ship. Lieutenant John A. Lord oversaw the research and restoration for the project. Although claiming to have restored the ship to her War of 1812 appearance, Lord’s research mixed plans from different periods in the ship’s history. When Constitution left Dry Dock 1 in 1930, Lord and the U.S. Navy had essentially created a version of Constitution that had never before existed.

It’s safe to assume that Lord never used the 1812 model as a guide. He misinterpreted many elements of the ship through his research, including raising the upper bulwarks to an unnatural height, filling in the open waist with solid bulwarks, and adding a tall, slender galley smokestack. All of these parts are visible in the photograph below taken during Constitution‘s three-coast tour of the United States from 1931 to 1934, also known as the National Cruise.

Constitution returned to the Charlestown Navy Yard in May 1934 at the conclusion of the National Cruise. She was decommissioned on June 8, 1934 and was sometimes open for public visits in the years afterwards. During World War II, Constitution was recommissioned and used as a place of confinement for officers who were maintained in the Captain’s Cabins while awaiting courts martial. Some repair and restoration work was done on the ship in the 1950s and 1960s. It was not until the mid-1970s, at the suggestion and through the research of Commander Tyrone G. Martin, Constitution‘s Commanding Officer, that a decision was made to thereafter restore the ship to her War of 1812 appearance.

Once again the 1812 model at the Peabody Essex Museum became one of the primary resources for physical changes to Constitution. An obvious change to the spar deck was the 1977 recreation of the larger and more historically accurate galley smokestack.

A plan for the new smokestack was drawn in late January 1977 and was based on the 1812 model. The smokestack is referred to as a “Charlie Noble” on the plan, but this term is from the mid-19th century and is not historically accurate to the War of 1812 period. The replica smokestack is greater in diameter than the narrow pipe installed in 1931. Two hundred years ago, a larger pipe was necessary because Constitution‘s galley stove was fitted with a smoke jack. A smoke jack was a cooking appliance used to roast meat. It is a turbine powered by the heat and smoke rising from the stove and connected to a rotating spit via pulleys and chains. A priority of the 2007-2010 pier side restoration was to reopen Constitution‘s spar deck waist bulwarks. PEM’s 1812 model, along with a number of plans, paintings, and late 19th-century photographs, informed the decision to cut away two 40-foot sections of bulwark, port and starboard, flanking the main hatch. During the 2007-2010 restoration, a new longitudinal plan was drawn showing Constitution‘s open waist. This reestablished her War of 1812 look to the upper hull. To finish the look, new hammock irons, rails, and netting were made to recreate the open waist. Two hundred years ago, Constitution‘s sailors’ hammocks would have been stored in the open waist netting. Thanks to “Old Ironsides'” sailors who created the 1812 model, USS Constitution‘s upper hull is now more historically accurate than it has been in over 100 years. The model continues to be a significant three-dimensional primary resource for the Naval History & Heritage Command Detachment Boston and its mission to ensure that each restoration brings Constitution closer to her 1812 configuration. Visit the USS Constitution Museum to see over 70 handcrafted ship models on display in Masters of Miniature. The exhibition is open daily and runs through January 2, 2016.