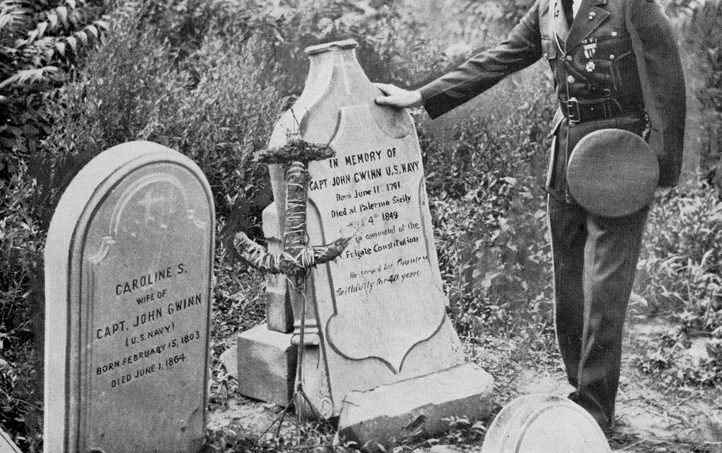 While most of USS Constitution‘s captains are known for their adventures during their lifetimes, there is one captain who made waves during his life and after his death.

Captain John Gwinn was the first captain to die while in command of USS Constitution. Following a short illness, Gwinn died in Palermo, Sicily, 167 years ago on September 4, 1849. A log kept by Midshipman R. M. Caldwell casually mentions the captain’s death between condemnation of some foul-smelling barrels of rotten beans and the arrival of an American ship from Trieste.

Caldwell’s log continues on the day after Gwinn’s death as carpenters and armorers set to work fabricating Gwinn’s coffin from wood and lead. The captain’s internment in Palermo was meant to be a temporary one. The funeral took place on September 6, 1849 and “his remains were followed to the tomb by officers and men of [Constitution], as well as by the officers of all the foreign ships in port and by the civil and military authorities of this city,” as noted in a letter from Assistant Surgeon Phineas Jonathan Horwitz to Gwinn’s widow.

A few crew members saw the funeral as an opportunity to spend a night on the town and 14 sailors deserted after the ceremony. A number of them returned voluntarily and the remainder were caught. The ship’s new commander, Lieutenant James H. Rowan, continued in Captain Gwinn’s harsh disciplinary manner and meted out severe punishments (12 lashes) to many of them.

Sometime in 1850, Captain Gwinn’s remains were brought back to Philadelphia, Pennsylvania, on the US Store Ship Erie and were re-interred at the Glenwood Cemetery. His wife, Caroline S. Lynch Gwinn, joined him upon her death in 1864, as did other family members over time.

There the Gwinns remained for 81 years until, in 1931, the Glenwood Cemetery was found to be old and abandoned and ready to be razed. Family members of persons buried at the cemetery were contacted, but no one in Gwinn’s family could be reached. Captain Gwinn and Caroline’s  graves were slated to be destroyed until members of the Private John McArthur post of the Veterans of Foreign Wars (VFW) discovered the graves and rang the alarm bell.

Letters were written to The Philadelphia Record, the Naval Historical Foundation, the National Naval Liaison Officer of the VFW, and the Philadelphia County Committee of the VFW suggesting the exhumation of Captain Gwinn and his wife, Caroline, and reburial at the National Cemetery in Arlington, Virginia.

A new coffin was produced to hold the couple’s remains. During the transfer from the old coffin to the new one, 22 uniform buttons were removed from the still intact uniform coat, which is a testament to the enduring quality of the U.S. Navy officer’s garments.

The moment of exhumation also afforded a closer look at Captain Gwinn himself, as no other images are known to exist. The undertaker in charge of the project, Charles O’Neill, who was also Commander of the Liberty Bell Post 1906, VFW, remarked, “…never [have I seen] such large jaw bones as those of Captain Gwinn, also that there were four teeth missing, and in addition, that Captain Gwinn had red or auburn hair. Might also add that when the grave digger took hold of the skull of Captain Gwinn [it] broke in half across the head.”

Thousands of people lined the streets as the coffin was transported to the railroad station. Flags were lowered to half-mast, church bells rang, and a Navy band played the funeral march. The procession was followed along by representatives from all the military branches, members of multiple VFW Posts, and women’s auxiliaries in white dresses and gold-lined blue capes.

There was a brief attempt to have the coffin brought to Washington on board USS Constitution, which had just begun her National Cruise, but the timing was not right and preparations to transport the bodies by train were already made.

After arriving by train, on August 24, 1931, the coffin was carried to its new grave site at the National Cemetery in Arlington, Virginia. There, the bodies of Captain John Gwinn and his wife, Caroline, arrived at their final destination on Lot No. 2913, Section 4.

The following month, when USS Constitution made a scheduled visit to a port in Philadelphia for the National Cruise, the silver plaque that was mounted on the original coffin was presented to the ship. The plaque was displayed on board until 1974, when it was transferred to the USS Constitution Museum. The plaque reads:

After all these elaborate and generous actions, one would think the saga ends here. However, photographs taken of Captain Gwinn’s headstone in 2010 by the Executive Director of the Naval Historical Foundation, Captain Charles T. Creekman, Jr., USN (Ret.), brought attention to the headstone’s understated wording. The engraving reads, “John/Gwinn/Maryland/Captain/US Navy/September 4, 1849,” and makes no mention of USS Constitution. An “upgrade” to the headstone was suggested. Nothing came of this request until an error was discovered on the back of the headstone. There was carved: “His wife/Elizabeth/Bruce/September 4, 1849.” Gwinn’s wife, in fact, was Caroline S. Lynch and she died on June 1, 1864. With this information, and proof in the form of a marriage certificate for John Gwinn and Caroline S. Lynch in the collection of the USS Constitution Museum, Captain Creekman was able to convince the National Cemetery office to “upgrade” John Gwinn’s information and correct the name and death date of Caroline. This process is currently underway and we hope to soon put an end to the posthumous adventures of Captain John Gwinn by dedicating his and Caroline’s new headstone.

Captain Creekman, who visited Arlington National Cemetery in September 2016 on the 167th anniversary of Captain Gwinn’s death, confirms that the new headstone for Captain Gwinn and his wife, Caroline S. Lynch, is now in place!

Harrie Slootbeek is the Collections and Exhibits Manager at the USS Constitution Museum.