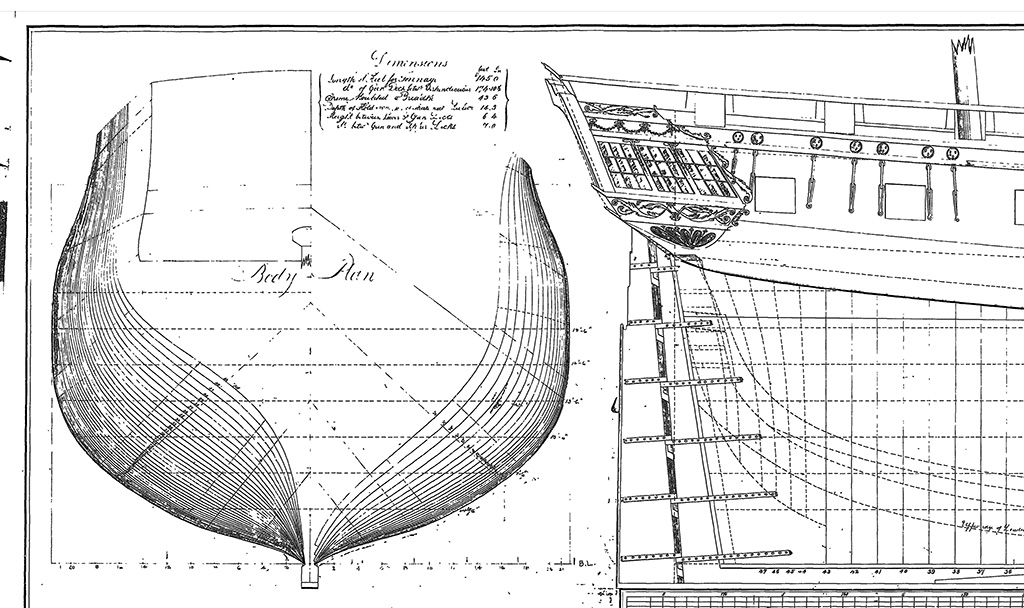 Elaborate structures known as forecastles and after or stern castles were essential elements of naval architecture for hundreds of years. These areas of a vessel, which were often a series of balustraded galleries that were either open to the weather or enclosed in glass, provided living space for the sailors (forecastle) and the captain and officers (after castle). As the 18th century progressed and warship design became more and more codified, only the largest of sailing warships — the two and three deck ships-of-the-line — retained the large and heavily decorated stern castle. Smaller warships “of twenty guns and upwards, on one deck, [had] quarter galleries, but no stern gallery.”1

USS Constitution, a frigate with one covered deck of guns, is fitted with “quarter galleries.” In maritime parlance, all of the space aft of the gangway/main mast was considered the “quarter deck.” Therefore, the aftermost galleries that project from the corners of the ship were known as quarter galleries. These glass-enclosed spaces are not part of the hull structure as can be seen in the Body Plan portion of the William Doughty 1794 copy of Joshua Humphreys’ plan of the 44-gun frigates (below).

The quarter galleries were necessary as they allowed light and air to enter the suite of rooms that made up the captain’s cabins. And, most important, each quarter gallery was fitted up as a water closet (heads).

As originally designed by Humphreys (see plan above), the quarter galleries were intended to be as highly decorated as were the ship’s bow and stern. Festoons of swagged garlands and interwoven vine motifs covered the galleries’ roofs and sides and what appears to be “gadrooning” (a carved and rounded moulding) decorated the underside of the galleries.

In 1808, when Constitution returned from the Mediterranean Sea, Commodore John Rodgers oversaw a nearly $100,000 rebuild of the ship which included the following carved and decorative work:

To Carving a Billet Head, with figures – quarter pieces with Bust etc upper and

lower finishings for Gallery, one pair trusses for Stern [pair] Bracketts for

As attractive and beneficial as the windowed quarter galleries and stern were to the captain in his cabins, the vast amount of glass rendered the after part of the ship vulnerable to enemy fire in battle. During the December 29, 1812 battle with HMS Java, Constitution suffered raking fire at 2:35 PM when her opponent crossed her stern, firing her guns right through the stern windows. It was also in this barrage that Constitution‘s double wheel was shot away and Captain William Bainbridge was severely injured. An eyewitness to Constitution‘s battle damage was Midshipman Isaac Mayo who was on the Brazil Station (Constitution‘s battle occurred off the coast of Brazil) and who met up with the frigate on January 1, 1813. Mayo recorded in his private journal:

Throughout the 19th century, as USS Constitution‘s service in the U.S. Navy evolved from that of a front-line warship, to a training vessel (both sailing and stationary), to, finally, a housed-over receiving ship, the vessel itself underwent significant structural and decorative changes. The six windows at the captain’s cabin on the gun deck were replaced with three windows and two port holes and all of the elaborate carvings were stripped away. The quarter galleries suffered the same fate. The actual shape of the galleries was simplified and altered and the decorative garlands, vines, and gadrooning disappeared. In their place simple architectural pilasters adorned the spaces between the windows.

The 1927 – 1931 nearly $1 million restoration of USS Constitution replaced 85% of the ship’s structure. All of the framing and planking above the waterline was replaced. The quarter galleries that had been placed on the ship during the 1872 – 1877 rebuilding in the Philadelphia Navy Yard were rotten to the core by the time Constitution entered Dry Dock 1 in the Charlestown Navy Yard in late June, 1927. As part of the massive restoration of the ship, the rotten 1870s galleries were removed and replicated.

The 1927 quarter galleries were replaced in the 1960s and again in the 1973 – 1974 dry docking and restoration. These areas of the ship tend to rot fairly quickly because of the chronic infiltration of fresh water through the windows, the roofs, etc. The “greenhouse effect” of the heat build-up in the galleries during the hot summer months produces condensation which also hastens the disintegration of the wooden structure. The port gallery was restored and the starboard gallery was completely replaced in the 1992 -1996 restoration.

For the 2015 – 2017 dry docking, both galleries once again required extensive rebuilding. The photographs that follow cover the work that began in February, 2016 on the port quarter gallery and which continues today with the starboard gallery.