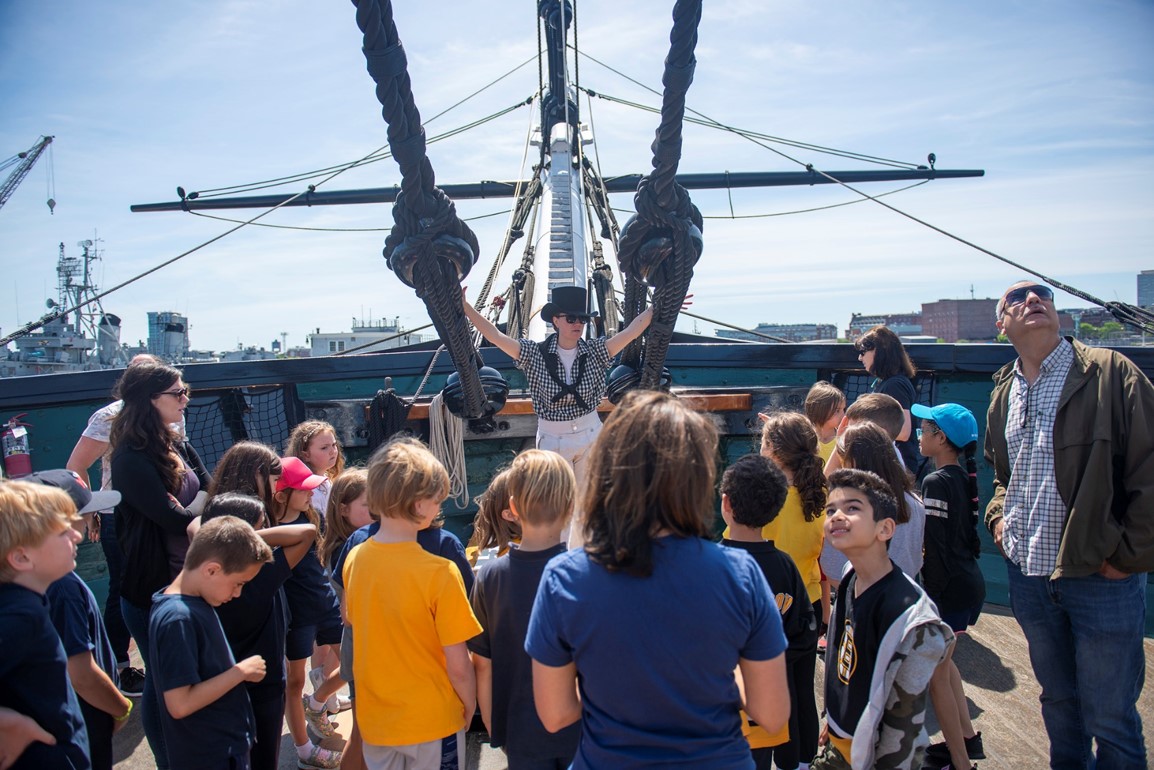 Constitution’s role in education is not a new phenomenon. From the time it first set sail, Constitution, like nearly all naval ships at the time, was a training ground for midshipmen — young officers in training. Often joining as teenagers, midshipmen learned the roles of an officer through on-the-job training. It was an education in leadership as well as seamanship and warfighting. They led sections of the crew in gunnery and sailing maneuvers, but also learned to navigate. Many of Constitution’s midshipmen went on to life-long distinguished naval careers.

Each midshipman was responsible for keeping his own journal or version of the ship’s logbook, recording daily activities, weather, as well as the ship’s course, speed and position. Like any student notebook, however, they frequently also included sketches and personal notes. The USS Constitution Museum has several midshipman’s journals in its collection from throughout Constitution’s active sailing period, providing us with a window into the lives of these future officers and often supplementing the official account of the ship’s actions from the deck logbook.

In 1860, following a two-year refit at the Portsmouth Naval Shipyard in Kittery, Maine, Constitution sailed to Annapolis, Maryland, to become a training ship for the U.S. Naval Academy. There, the ship served as a home for the freshman class of students at the academy. The next spring, however, with the outbreak of the American Civil War, the Union Navy grew concerned that Annapolis was too close to the front lines of North and South. Constitution and the Academy’s other training ships, Santee and Macedonian, were taken to Newport, Rhode Island, where the academy was relocated for the duration of the war.

Constitution returned to the role of navy training ship in 1879 when it became one of four ships in a new navy program, the Apprentice Training Squadron. Lasting until 1904, the apprentice program was designed to create a pathway into the navy for qualified teens. They joined at one the navy receiving ships, then were sent to a naval station for academic and naval education. After six months in the classroom, they joined one of the underway training ships for six months. If they successfully completed the program, the students transferred to regular duty warships where they continued their training as apprentice second class. Constitution’s active sailing role in the program ended in 1881 with the ship’s final sail under its own power, and it later became a receiving ship for new sailors at the Portsmouth Naval Shipyard. After returning to Boston in 1897, Constitution’s role in education widened from naval training to broader school topics. To raise funds for its restoration in the 1920s, schoolchildren across the country sent in their pennies as part of a program that included promoting the ship’s role in the nation’s history. That educational role was emphasized through a national essay contest.

One of the most complex machines of the pre-industrial age, a square-rigged, wooden sailing ship like Constitution is a showcase of lessons in physics and engineering design that still resonate today. At the same time, the reasons for its creation are a window into 19th century global politics and economics, providing relevant context for lessons in today’s world trade and diplomacy.