A Tale of Two Deliveries 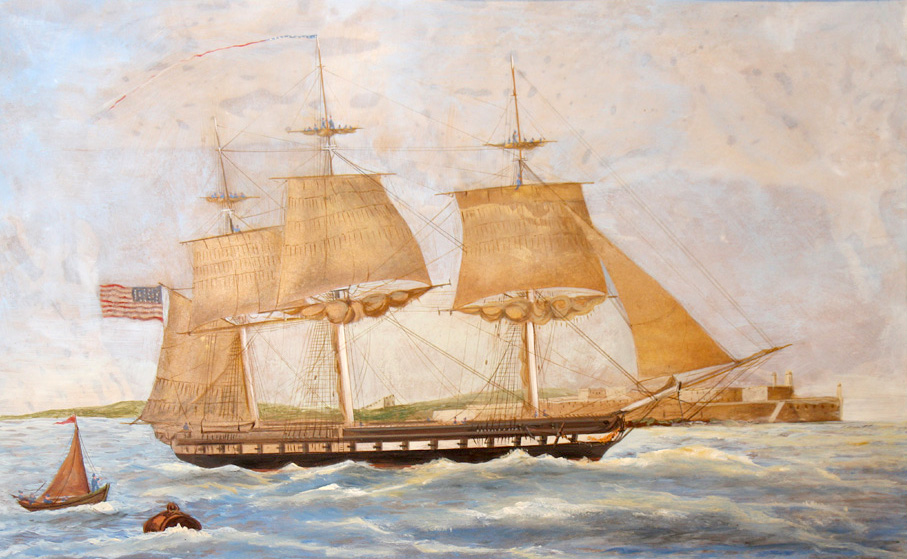 On February 24, 1849, USS Constitution made two special deliveries in the Mediterranean. The first was the delivery of Daniel Smith McCauley and his family to Alexandria, Egypt, where McCauley was to become the first U.S. consul general to Egypt. At 9:00 a.m. local time, the ship arrived outside the harbor of Alexandria, and hove-to to wait for the local pilot who would guide the ship to anchorage in the harbor.

The second delivery, occurring just a half hour later, was a birth on board the ship. Daniel McCauley’s son, Constitution Stewart McCauley, was born at 9:30 a.m. local time while the ship was still waiting for a pilot. Both the newborn and his mother, Frances Ann Jones McCauley, were reported in good health.

It should have been an auspicious beginning to McCauley’s post, but once the ship was cleared in, McCauley was quickly thrust into resolving a dispute after a confrontation between one of Constitution’s midshipmen and Egyptians on shore.

At the time of McCauley’s arrival, Egypt was still technically part of the Ottoman Empire, but had been operating as a largely independent state under a hereditary monarchy since 1805. In November 1848, Abbas Hilmi I Pasha, the grandson of Muhammed Ali, became regent of Egypt. Abbas was less interested than his predecessors in dealing with European and American interests, and U.S. trade with Egypt had not been particularly successful up to that point. But the repeal of the British Navigation Acts in 1849 opened the door for American merchants to carry goods from Egypt to England, which could then be traded for English goods to ship to the United States. That opportunity, among other considerations, demanded a stronger American presence. McCauley had been serving as the U.S. consul in Tripoli since 1831 when he was appointed to the consul general position in Egypt. At the time, few American consuls came from professional backgrounds in the foreign service. The position of consul was often filled by civilian American businessmen who offered to assist with issues involving Americans in foreign countries. They were nominally paid and had no background in diplomatic relations. McCauley’s arrival signified a greater American commitment to a presence in Egypt.

The delivery of McCauley’s family from Tripoli to Egypt was typical of the diplomatic and support missions that kept the Mediterranean Squadron busy throughout much of the first half of the 19th century. Daniel and his pregnant wife, Frances, along with their children, a servant, and all their household belongings, boarded USS Constitution in Tripoli on January 21, 1849. They headed first to Malta, which served as a regular Mediterranean port stop for Constitution. McCauley was briefed by U.S. interests in Malta about the situation in Egypt before assuming his new post. After two weeks in the harbor at Valletta, Constitution began the roughly 1,000-mile voyage east to Alexandria, Egypt.

Although the daily watch record from the ship’s logbook suggests favorable winds and relatively pleasant conditions, Captain John Gwinn later complained of the weather in a letter to the Secretary of the Navy. Gwinn died of chronic gastritis six months after the McCauleys’ voyage, and it’s likely he was already experiencing symptoms in January that made the journey particularly uncomfortable. If Gwinn was having a rough time, it could not have been any easier for Frances McCauley, already eight months’ pregnant on the departure from Tripoli.

The only record of Constitution Stewart McCauley’s birth on board is a notation in the ship’s log, and Gwinn’s correspondence to the Secretary of the Navy. In addition to carrying the namesake of the ship, the newborn McCauley bore the name of one of Constitution’s most famous captains, Charles Stewart, who was also his great uncle.

Once the ship cleared into Egypt, Gwinn and Daniel McCauley headed to Cairo to meet with the pasha. Meanwhile, the ship’s crew began preparing for the next passage to Spezzia, Italy. While taking on water at a wharf in Alexandria, two crew members of one of Constitution’s cutters were involved in a fight with a group of Egyptians. Midshipman Joseph Danels, who was in command of the cutter and its crew, attempted to break up the fight by jumping ashore and ordering his crew back into the boat. Shortly after, a group of Egyptian soldiers arrived and demanded that Danels hand over the two sailors involved in the fight. When Danels refused, they arrested him. According to Danels’ account, the soldiers beat him when he attempted to resist arrest. He was taken first to a nearby guardhouse, then marched through the city streets to the office of the police chief. There, another representative from the U.S. consulate arrived and arranged for Danels’ release. When news of the incident reached McCauley in Cairo, he declared it an insult to an American naval officer and insisted that the pasha take direct and severe action against the Egyptian soldiers involved. According to accounts from McCauley and vice consul, Alexander Tod, the soldiers were later sentenced to be bastinadoed, a painful cane whipping of the soles of the feet. One of the men received 100 lashes. The officer in charge was imprisoned for 10 days and later publicly stripped of his rank at McCauley’s insistence.

Daniel McCauley died in Egypt on October 26, 1852. Though there is no official record of the cause of death, he could have succumbed to cholera during an outbreak. McCauley was buried in Alexandria in a British Protestant cemetery that was eventually left untended and forgotten. In 2021, the U.S. Embassy and Consulate in Egypt began efforts to research McCauley as the first U.S. consul general to Egypt and identify his gravesite.

Constitution Stewart McCauley was returned to New York, where he died in 1854 at the age of five. Only three of the seven McCauley children lived to adulthood. It’s unclear when Frances McCauley died. She unsuccessfully petitioned the government in 1858 to reimburse McCauley’s estate for expenses he had incurred while serving as consul in Tripoli, and the issue remained unresolved as of 1870.