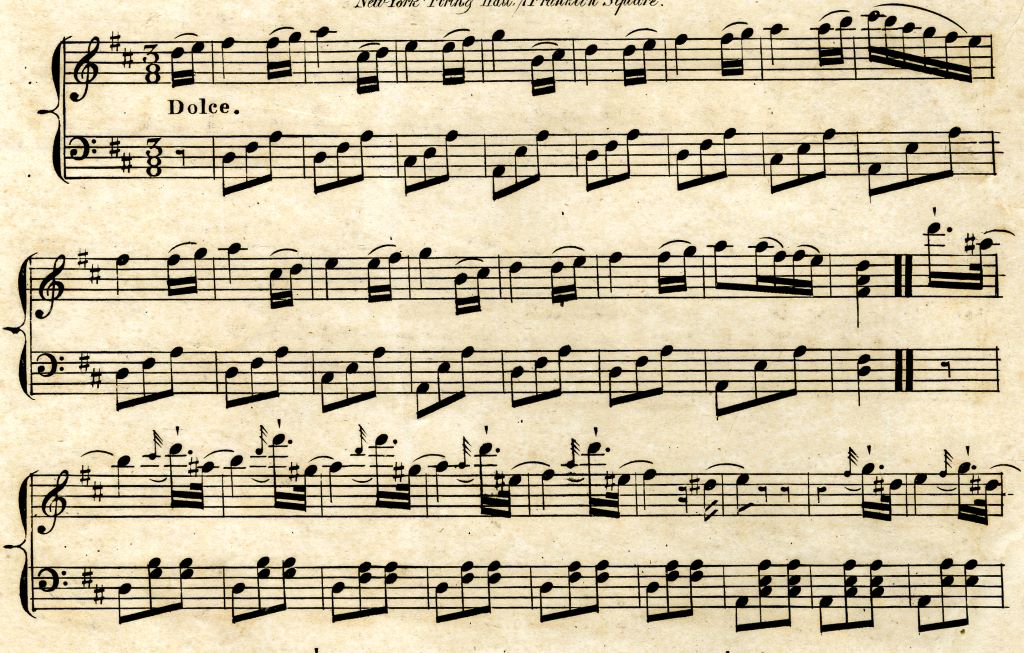 When 16-year-old Frederick Christian Fischer signed up to join the crew of USS Constitution in 1844, he knew it was likely to be grand adventure. The ship was preparing to depart for a two-year circumnavigation of the world that would become known as USS Constitution’s World Cruise. But Fischer was not a sailor, he was a professional musician sailing as part of USS Constitution’s official band.

Frederick, along with his father, Christian, and the rest of their family, had arrived in the United States from Germany only a year earlier. They settled in Baltimore, Maryland. The elder Fischer, who was also a professional musician, joined his son as a band member on Constitution. He was listed as “Johann” in the ship’s records and died of a stomach ailment while on the course of the trip.

Frederick kept a journal, written in German, of his experiences during the voyage. In 1995, translator Noah G. Good and editor Annabelle F. Fischer, a descendant of the Fishers, published Frederick’s journal in English. Titled, Experienced and Conquered, the journal provides Frederick’s perspective of life on board as someone who was part of the crew, yet somewhat separated. Frederick and Christian Fischer spoke little English when they first boarded the ship. They were two of seven Germans in the nine-member band. The Germans were joined by American William Cook and Spaniard Anthony Bolasteras. As band members, they participated in many of of the daily tasks of the crew, but were still separate in their designation and tasks as musicians –never certain when they’d be called to duty or for what occasion.

In one of his earliest accounts of the trip, Fischer wrote in his journal about the band being called to play for the boarding of Henry Wise in New York. Wise, the new minister to the recently independent nation of Brazil, was being transported to his post in Rio de Janeiro by Constitution as part of the ship’s first leg in the circumnavigation. Fischer wrote that the band played for a half hour, but Wise never arrived. After being dismissed, the band was called back together an hour later when Wise and his family finally arrived, accompanied by an entourage of well wishers.

While Fischer’s journal is a rare written record of the life of a musician at sea in the 19th century, his experience was not uncommon. From the 1820s to the 1850s, Constitution employed a variety of musical bands whose members were drawn from international cultures and backgrounds. Musicians were often recruited in foreign ports where Constitution was serving on squadron duty. Although foreign nationals, the musicians became enlisted members of the U.S. Navy. At the end of their enlistments, many returned to the same ports from which they were recruited. Others ended their duty in the United States, presumably to settle permanently.

In August, 1849, Constitution enlisted 10 band members in Messina, Sicily, while on duty in the Mediterranean. Most of the band was discharged at La Spezzia, Italy, the following year. At least one member, Guiseppe Gulotta (Galotta), stayed on for the ship’s return voyage to the United States. He left the ship in New York in January 1851.

Later, when Constitution was serving as part of the African Squadron in 1853, a band was assembled that included Portuguese musicians from Luanda, Angola; Funchal, Madeira; and Porto Praya, Cape Verde.

The need for a band on board coincided with the peacetime duties that fell to Constitution and other U.S. Navy ships in the mid-to-late 1800s. Squadrons of Navy ships were ordered to locations around the globe where they participated in a wide variety of diplomatic and ceremonial roles, in addition to simply demonstrating their presence as a protection to merchant shipping. During the War of 1812, Marine fifers and drummers signaled commands to their shipmates in battle. During peacetime, and with an increase in new diplomatic roles, larger and more complete musical bands provided music for formal occasions with local dignitaries, as well as entertainment for the ship’s crew during listless long periods at anchor or on station.

During Constitution‘s service in the Africa Squadron, the band was frequently called upon to play “God Save the Queen” for British passenger steamers arriving in port en route to other destinations. During these port stops by passenger ships, Constitution frequently hosted elaborate evening gatherings on the ship. In his journal, Edward Cobb, the clerk Commodore Isaac Mayo, recounted several of these events, including one on  January 31, 1854:

On the the afternoon of the 31st, the Commander in Chief sent invitations to the officers and passengers on board and on shore to the Governor and Staff inviting them to a Theatrical and Musical Soriee; the Quarter Deck was handsomely decorated with the Flags of different nations, and by 6 p.m. there was a large representation of Officers and passengers from the Steamers, with the guests from the shore, including a large number of Ladies from the steamer. Among the Visitors were the Portuguese Governor & staff from Porto Grande, the American Vice Consul and a number of officers of the British Army bound to the Cape of Good Hope, to join their respective corps. After the Dramatic entertainment, the deck was cleared, when dancing commenced on the spar deck and continued until 11 p.m. when the visitors returned to the shore and Steamers, evidently much pleased with the entertainment and the courtesy extended to them.1

The diversity of languages and cultures represented by these bands no doubt created a polyglot on board. Though Fischer reports being asked to play popular American music and anthems, each of these bands also brought with them local musical influences that would appeal to audiences of local officials, visitors, and dignitaries.

Musical bands continued to be a part of ships’ crews on naval vessels. In 1852, a shoreside Navy Band was established at the U.S. Naval Academy. An official Navy Band, based in Washington, D.C. was recognized in 1925. Today, the U.S. Navy Band actually consists of several different bands and musical groups performing music ranging from symphonies to bluegrass.

Here is a list of musicians who served on USS Constitution in the early- to mid-1800s. These names are drawn from the USS Constitution Museum’s database of Constitution‘s crew throughout history. The data for these names comes from a variety of sources, including muster rolls, logbooks, official and personal correspondence, and personal journals. When creating ship’s records, officers sometimes guessed at name spellings based on pronunciation and phonetics, particularly for names of non-English origin. As a result, there are variations in spelling among different sources. Sorting through these discrepancies is one of the challenges of doing historical work in this time period. Presented in this document is the raw data drawn from the records. We will update this list as we continue to verify individual sailor identities.