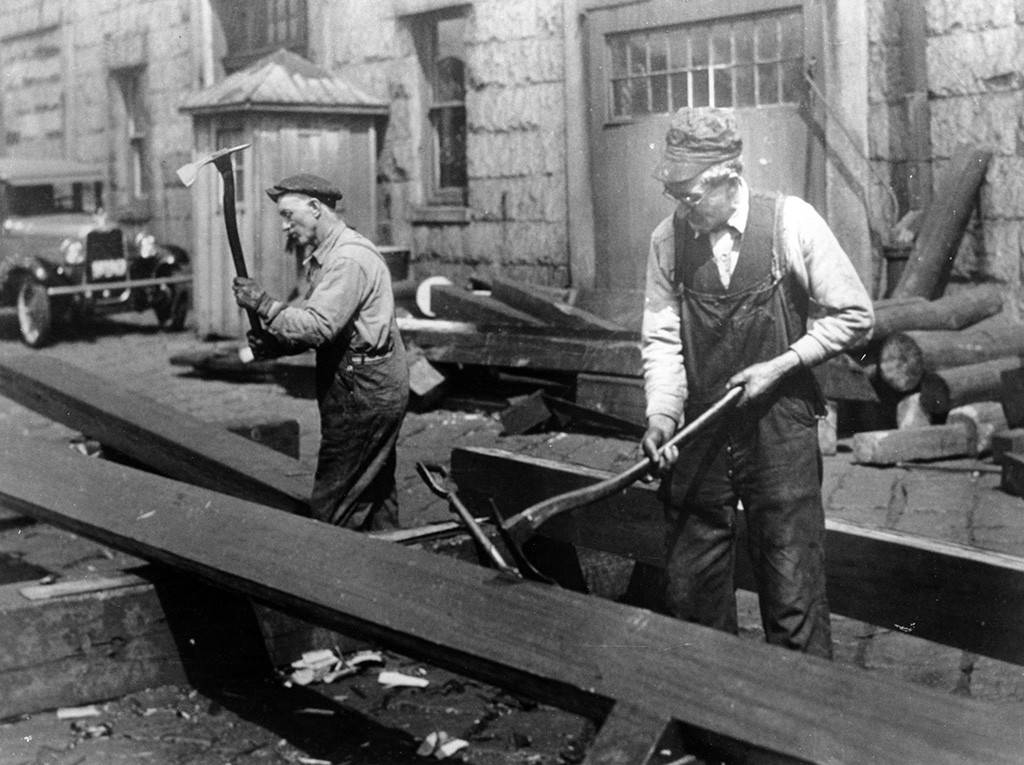 Since 1795, when USS Constitution‘s keel was laid, to the current restoration, skilled craftspeople have used specialized tools to build and then restore “Old Ironsides.” These tools have evolved over time.

One tool common to ship construction is the axe. Different varieties of axes were used to shape timbers in shipbuilding. The axe pictured below likely belonged to Jacob Sibley who headed south from Maine in 1795 to work on USS Constitution, which was being built in Edmund Hartt’s Shipyard in Boston’s North End. Family tradition says that Sibley used this axe while working on the ship.

The forged iron axe head surmounts an oak handle, for an overall length of 33 inches. The head is original but the handle has been replaced. The handle is offset, so that when the axe is swung, the cutting edge will come down to the side of the hewer’s work.

To better understand how this tool would have been used, the USS Constitution Museum made a replica of the Sibley axe in 2014. The axe’s history and how it was used is documented in this short film.

In 1927, ship carpenters from Bath, Maine, skilled in the use of traditional ship building hand tools, such as side axes and adzes, were brought to the Charlestown Navy Yard to restore Constitution. Although gasoline and electric-powered hand tools were becoming available at this time, these men worked efficiently with equipment that was little changed from the time of Constitution‘s building.

Adzes are used to chip away at the surface of the timber, either to reduce its size or to shape it to a particular dimension. Depending on the size of the adze and curvature of the blade, a skilled adzeman could plane the surface of the timber quite smoothly with little trace of the adze blade. Beginning around World War II, electric planers replaced the adze in the Charlestown Navy Yard for speed and efficiency. During the 2007-2010 restoration of Constitution, light-weight electric planers were used to fashion new deck beams. While the knowledge and skill necessary to restore this historic ship is very similar to that of Edmund Hartt’s shipyard workers of the 1790s, the equipment has evolved from heavy manual tools to light-weight electric and gasoline-powered machinery for greater speed, efficiency, and safety.