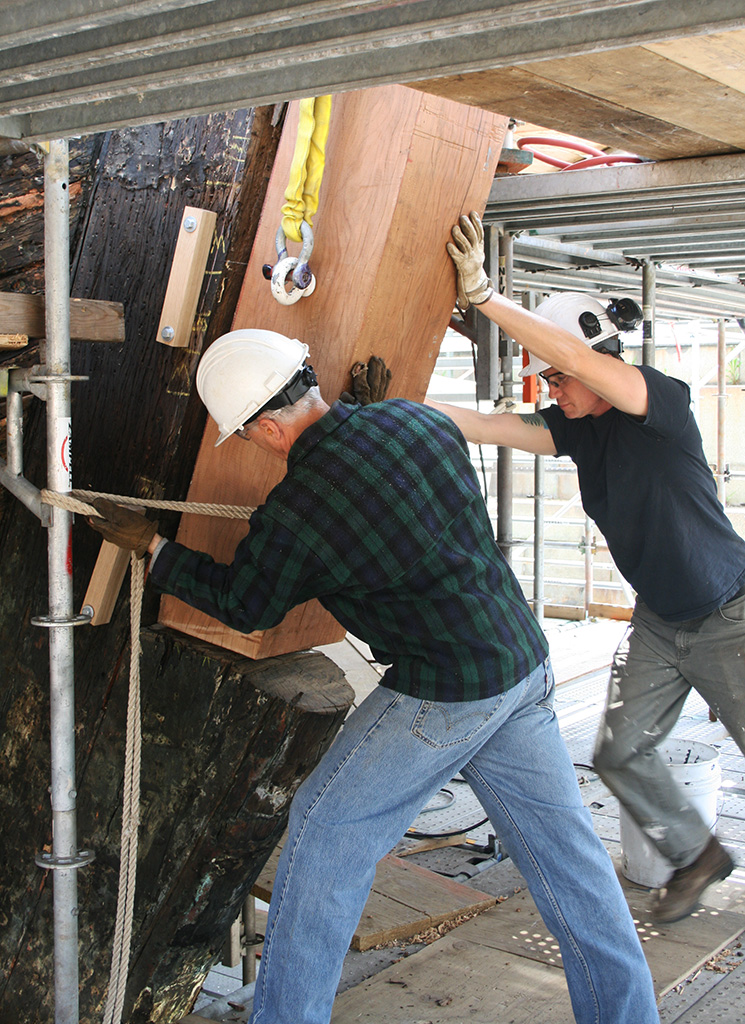 Since the summer of 2015, Naval History & Heritage Command Detachment Boston ship restorers and riggers have been working off and on with the rebuilding of USS Constitution‘s cutwater. The cutwater is a structure made up of several pieces of large timber and projects from the ship’s bow. It parts the water as the ship sails along, making her passage easier.

The last time the cutwater was fully rebuilt was during the 1927-1931 restoration. At that time, live oak timber from the Pensacola Naval Air Station timber ponds in Florida were used to rebuild the ship, including the cutwater. The timbers had been stowed in Commodore’s Pond since 1855. Approximately 1,500 tons were shipped to Boston, of which 900 tons were used throughout the entire vessel during the restoration.

Live oak, which is primarily found in the southeastern United States, is one of the most durable hardwoods. Joshua Humphreys, the principal designer of the six frigates, specifically called for live oak in their frames and other important structural members. Although it cost five times more than white oak to harvest and ship to the yards, Humphreys convinced the War Department to spend the money on live oak with the argument that it would last five times longer than white oak in the ships’ hulls.

Humphreys’ prophecy has been proven true in the 20th and 21st centuries as NHHC Detachment Boston is only now replacing live oak structures that were installed over 85 years ago. Having required just a few repairs since its installation in 1927, large sections of the cutwater are being replaced due to rot caused by long exposure to the elements. The wood is also decayed where the iron straps, which help to support the bowsprit, are through-bolted into the structure.

In order to rebuild the cutwater, new live oak timbers must be shaped. The live oak used for this project was harvested in the late 1980s and early 1990s for the 1992-1996 restoration. For the past 20 years, the timbers have been stored at the Portsmouth Naval Shipyard in Kittery, Maine.

The NHHC Detachment Boston ship restorers and riggers work out of Building 24 on Pier 2 in the Charlestown Navy Yard. Adjacent to Dry Dock 1, where Constitution currently resides, the ship restorers and riggers have a dedicated work area in front of their building.  In this workspace, the new TimberKing 2000 sawmill is set up to cut the largest timbers needed in this restoration. The diesel-powered saw, with a modified extended bed, is capable of cutting trees up to 40 feet in length and 36 inches in diameter.

The first piece of live oak shaped for the cutwater weighed nearly 1,000 pounds. On May 9, 2016, using the Linkbelt crane, the piece was hoisted onto the TimberKing’s bed to begin the cutting and shaping process. In the photo below, NHHC Detachment Boston rigger Bill Rudek adjusts the hoisting chains while ship restorer David Cavanaugh, one of two staff responsible for the cutwater’s rebuild, oversees the process.

The video below from May 9, 2016 documents the cutting of the first piece of live oak for the cutwater. The video begins with ship restorer Joe Halter (in black coat) and rigger Jon Stolarksi (in black T-shirt) replacing the first of two TimberKing blades used that day. Water and dish soap are used to lubricate the blade. The live oak is hoisted onto the TimberKing bed with the help of a crane and properly aligned and secured. Joe Halter, at the controls of the saw, cuts the live oak piece to the pre-determined specifications.

After the large piece of live oak was cut down to the appropriate size, the plywood patterns were attached to the wood as templates for the final cutting and shaping.

NHHC Detachment Boston riggers and ship restorers worked together to install the first piece of live oak for the cutwater in May 2016, a process that took several days to complete. The large piece spans from the gun deck level to several feet below the waterline.

Using a doubled rope to draw the base of the wood into place, ship restorers David Cavanaugh and Bruce Caporal wrestled the piece into position. Once the new live oak piece was in the right location, large c-clamps were used to firmly secure it to the old live oak cutwater. Holes were then drilled for the bolts.

This process of cutting, shaping, and installing new live oak cutwater pieces will be repeated several more times while large sections of the structure are rebuilt. The cutwater work is one project in the 2015-2017 restoration that is easily seen by visitors from the head of Dry Dock 1. Stop by the Charlestown Navy Yard to see NHHC Detachment ship restorers and riggers in action, Monday through Friday from morning until mid-afternoon.