In January of 1815, the frigate USS President, commanded by Captain Stephen Decatur, encountered a British blockade while attempting to sail from New York. The British squadron, comprised of HMS Majestic, HMS Endymion, HMS Pomone, and HMS Tenedos, gave chase to the American ship and, after an exchange of fire, defeated her. President surrendered and was taken back to England as a prize.

William Clark, a British Master-at-Arms, was among those who boarded the defeated President. Clark removed this Bible from the carriage of a gun named “Montgomery” in honor of the American General Richard Montgomery, who died in the Battle of Quebec during the American Revolution. The name given to this book corroborates the assertion that guns on American warships were given names by the crew.

The Bible also highlights the importance of religion in the lives of seamen, despite their reputation for adhering loosely, if at all, to the strictures of religious teaching while at sea. The Reverend Edward Mangin, chaplain of HMS Gloucester in 1812, wrote that “nothing can possibly be more unsuitably or more awkwardly situated than a clergyman in a ship of war; every object around him is at variance with the sensibilities of a rational and enlightened mind.” This Bible would seem to be at odds with Mangin’s sentiments.

In May 1813, Chaplain Andrew Hunter of the Washington Navy Yard wrote to Secretary of the Navy William Jones about his attempts at supplying navy ships with Bibles: “I have endeavoured to supply every public ship that went out of the harbour with a number of bibles for the use of the seamen…The effects produced by their spending their spare time in reading those books have been visible to a number of the officers. If some plan could be adopted for supplying the ships at regular periods with the scriptures and some small religious and moral tracts I have no doubt it would produce an amelioration of their morals and increase their civilization.”[1]

In the early 19th century, numerous Bible societies dedicated to disseminating cheap editions of the religious work sprang up around the country. In February 1813, students at the College of New Jersey (now Princeton University) founded the Nassau Hall Bible Society. According to the society’s constitution, its purpose was to procure and distribute Bibles “among those who are unable to purchase them.” The students’ first act was to distribute “the Bible among those who are engaged either by sea or land in fighting our battles.” It is likely that President’s crew received a supply at this time. A printed card affixed to the pastedown reads: “PRESENTED/ BY the BIBLE SOCIETY/ OF NASSAU HALL,/ PRINCETON.” A separate sheet glued to the endpapers reads: “Be it known that this Bible was taken from the Montgomery gun of the President Frigate where it was slung to the carriage of the said gun. It was taken by William Clark from where it hung after the engagement with the said Frigate, in December 1814 [sic]. He being master at arms and one of those that boarded the said President Frigate and as a further explanation, every gun of the said Frigate was named after some general or patriot of the United States and there was a Bible slung to the carriage of each gun and had the same name marked on the cover. This Bible was kept by me in remembrance of my brother the said William Clark, who departed this life in January 1819. Charles Clark.” 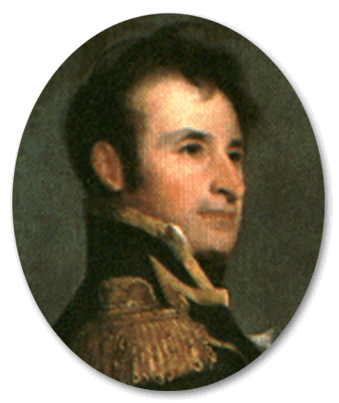